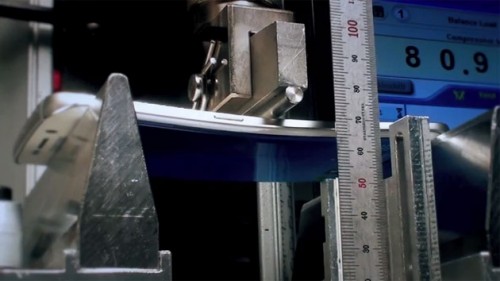 Remember Bendgate? It started last year when Apple faced the problem of the new iPhone models bending in consumers’ pockets and apparently the controversy is still going. Not with Apple, but now with Samsung, who are now responding to allegations that the Galaxy S6 Edge can easily be bent.

The allegations come from SquareTrade Labs, who just the other day introduced the BendBot – a robot designed specifically to test the bendability of smartphones. I can picture it now, roaming the Earth long after we’re gone, searching for things to bend; a mixture of Bender Bending Rodriguez and Wall-E.

Enough about my million dollar movie idea. SquareTrade’s BendBot has found that not only is the Samsung Galaxy S6 Edge just as easy to bend as the new iPhone, but it’s more likely to crack. Now Samsung has responded to these allegations with a video of the official stress test that the phone is put through.

In the end, it’s a case of they said versus they said and it goes without saying that your results with the phone may vary. My solution? Just take care of your phone like you would any consumer electronic that costs hundreds of dollars. You can check out the videos below, first the SquareTrade video and then the Samsung.