As we were sitting in my driveway talking the other night, that guy I hang out with mentioned something about Valentine’s Day. Now, I know that a number of people are really into it, truly get excited about the gifts and professions of love…I’m not. But that just makes it all the more fun to try to come up with alternative gifts that definitely are appropriate for the holiday, yet are not the standard candy and flowers and jewelry one has come to expect.

Take, for instance, this Darth Vader candy box. Heart-shaped, rhinestones, candy…it has all the elements of a traditional gift. Except for, you know, the part where the rhinestones form Darth Vader’s head. But I love it! The fact that it comes full of mini Reese’s peanut butter cups (my all-time favourite candy) doesn’t suck either. Your significant other won’t be able to resist the box, or you…and it only costs about $14.00 US.

How many times have you heard a woman lament that she cannot find the perfect man? Imagine what a hero you’d be if you could provide her with one, even if it’s not you. He’s got a nice body, he doesn’t talk back, he doesn’t steal the covers, and there are no worries about him leaving the toilet seat up. Plus there’s that thing where he’s made out of chocolate. See? Perfect! And only $8.00 US.

Is your other half also a D&D geek? It’s nothing to be ashamed of, really…there are a lot of people stuck in the 1980’s (which isn’t actually fair, as I know it’s evolved since it was played in my high school cafeteria). It’s made of solid red chocolate, and molded to look like a giant d20, measuring about 2.5″ (6.35 cm) in diameter. You know you want one, and you know you’re going to use it to play. Just don’t hold it in your hand for too long or it’ll melt. Costs between $13.00 and $19.00 US depending on where you shop.

Maybe your Valentine isn’t into chocolate. I don’t get that, but I hear some people aren’t. How about some Star Trek cookies instead? The wonderful folks over at Semi Sweet Designs came up with these, and they’ve even posted a tutorial so you can make your own. They’re a bit time-consuming (ok, a LOT time-consuming), but they’re really cool. And if you’ve got a Star Trek fan in your life, there’s not a lot of losing involved here.

Flowers are always good, yeah? Unless you don’t want to pay the astronomically inflated price of roses around this holiday, or unless your sweetheart is allergic to them. Instead, how about some 8-bit flowers and Legendary Heroes? They’re made of cut-out foam, and can either stand on a table or hang on a wall. And as opposed to real flowers, they won’t die, so they more accurately represent your undying love. Sounds hokey, but trust me…she’ll love it. And they only cost about ten bucks (US), as opposed to the $50.00 or more you’d have to shell out for real roses.

There’s nothing wrong with being a crazy cat lady, and now you can prove it by giving her this bouquet of kittens. They’re soft, furry, adorable, and won’t shed on the furniture. They attach to the stem by their Velcro collars, and there are nine of them. I don’t know why nine instead of a dozen…maybe it’s some crazy cat lady rule I don’t know about. Anyway, they’re not cheap at $50.00 US, but they are awfully cute.

I cannot even tell you how badly I hope someone buys this for me. I don’t see it happening (primarily because of its cost…this thing runs $230.00 US for 14k gold, or $155.00 for “silvery metal”), but I want it. Because it’s exactly what you see: Humping dinosaur skeletons. What girl wouldn’t want this around her neck? For that matter, what guy wouldn’t? It’s hysterical!

When you think of Valentine’s Day, you think of love, and relationships…and Darth Vader and Gollum. What, just me? Think about it! Darth Vader gave himself over to love of the Dark Side, and Gollum’s entire existence was ruled by love of the One Ring. See, makes sense now, doesn’t it? An artist by the name of PJ McQuade has made these Valentines, which are available as either just cards or as a card and sticker combination. They’re only $5.00 US each, so I think it goes without saying you need them both.

I NEED one of these! Tribbles are trouble, of course, but how can you resist this cute little guy? He’s pink, and purrs, and responds to your voice and touch. And he’s wearing little heart-shaped deely-boppers on a headband just for Valentine’s Day! I really want one. It runs one two AA batteries (included), has an on-off switch, and measures 11 1/2″ (29.2 cm) tall and 6″ (15.2 cm) in diameter. Take one home today for $24.99 US…but DO NOT feed the poor little guy any quadrotriticale under any circumstances!

This is either adorably cute or sickeningly sweet…I guess it depends on your outlook. The idea here is that hand-holding is one of the neater aspects of being in a relationship, but in winter it’s hard. Not that you can’t hold hands wearing gloves, but you don’t get that skin-to-skin contact that makes you feel all warm and fuzzy inside. Which leaves your hands decidedly not warm and fuzzy outside, because it’s cold. Endless circle. BUT…put on a Smitten (yep, that’s what it’s called) and you can hold hands while keeping said hands warm. Not a bad idea, really, unless you needed to actually use your hand for something. Each Smitten costs just over $40.00 US.

When you think of the best geek love stories, Han and Leia top the list. Why not show your significant other that your love is as strong as theirs (or as weird as theirs, whatever) by hanging a set of these “his and hers” towels in your bathroom? Each one is embroidered with its character as well as their famous lines on one side, and the Rebel Alliance insignia as well as a Star Wars logo on the other. They’re made of 60% cotton and 40% bamboo, and each one measures 16″ x 28″ (40.6 cm x 71 cm). Set of two goes for $19.99 US.

Here’s a thing that’s happening all over right now: “Holy crap, I forgot to make dinner reservations!” Good luck with that…not only is it Valentine’s Day, it’s Friday. You’re gonna be lucky to get in to that McDonald’s everyone on Facebook was talking about. Instead, how about making a nice romantic dinner at home? The Modernist Cuisine at Home is offering a free preview of their app, which costs $79.99 US, and it contains some wonderful ideas for a romantic dinner. And did you know that using a pressure cooker can not only cut loads of time off your meal prep, but also result in tastier, juicier, more flavorful meals? It’s a thought. Especially since you’ll be sleeping on the couch for the next month if you don’t come up with something to make up for not buying dinner at your partner’s favourite restaurant.

Oh, so many things to say about this! I’ll stick to the basics and let you form your own conclusions (and make your own jokes, because you know you thought of at least six just looking at the picture). What we have here is an alarm clock that is designed to be worn inside your panties, that will vibrate when it’s time to wake up. That’s all I’m going to say, other than the fact that it costs $70.00 US. You may now run free with your own commentary…lord knows I did!

And now we shall embark on a small selection of dating aids for those of you who do not have a significant other on whom you can shower any of the above items. Because everyone deserves to find love, however long or short a time they want it.

This book was made for those of you who are amazing superhero types behind a computer screen, but tongue-tied and nervous when faced with actual human interaction. But you’ve got to talk to someone if you want to ask them out, and once you ask them out you have to talk to them some more. The Geek’s Guide to Dating teaches you step-by-step, with pictures, how to find love. Even if you already have a love interest, this is a great way to get some ideas on how to keep her/him. At just $15.00 US, why not give it a try?

There are dating sites, and then there are dating sites. The difference is subtle, but important. In the former, you meet someone, fall in love, and live happily ever after. In the second, you meet someone, fall in bed, and walk away. Part Time Love is, of course, one of the latter…but not exactly. They describe themselves this way: We are not a no-strings website. We are for singles looking for regular partners with mutual attraction, genuine friendship, respect and a magical spark but whom have no expectations of moving in after three months and value their free time and independence. Part Time Love is available in the UK, US and Australia. 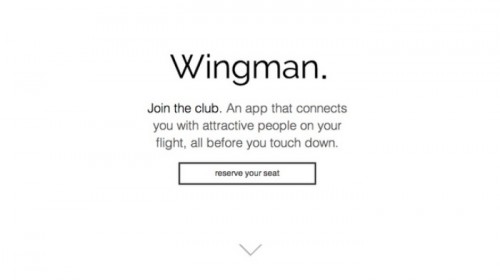 And then there’s this. The picture pretty much explains it all…It’s an app currently in development that will somehow introduce you to the person you’ve been eyeing in Seat 17B for the last three hours, allowing you to have a conversation and perhaps ask them out when you arrive at your final destination. No details on how exactly all that works, but it’s kind of interesting if a little creepy. You can sign up for their beta launch if you’re brave enough.