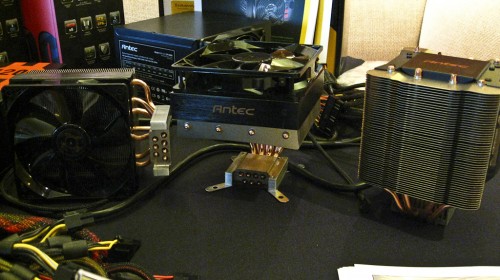 Fremont, CA – August 5, 2010 – Antec, Inc., the global leader in high-performance computer components and accessories for the gaming, PC upgrade and Do-It-Yourself markets, today announced the full availability of its brand new line of CPU coolers: the KÜHLER series. Three models, the KÜHLER Box, KÜHLER Shelf and KÜHLER Flow, make up the series, providing users with an assortment of options when selecting an optimal CPU cooling solution.

The KÜHLER Box CPU cooler is symmetrical and rotatable 90°, 180° and 270° in order to coordinate seamlessly with interior airflow, and offers a powerful choice for cooling high-powered builds. Equipped with a whisper-quiet 120 mm Pulse Width Modulation (PWM) fan positioned between two massive aluminum heat sinks, the KÜHLER Box is capable of blowing as much as 68.2 CFM or operating as quiet as 11.35 dBA, all while achieving maximum heat conduction and airflow. To offer unmatched heat transference, the KÜHLER Box boasts eight embedded copper heat pipes and is suitable for chassis heights up to 7”, offering versatile, powerful cooling performance for high-power gaming and overclocking applications.

The KÜHLER Shelf features a 120 mm PWM fan with a downward airflow design to blow cool air over an aluminum heat sink positioned parallel to the plane of the motherboard, resulting in 10 to 20 mm more clearance than similarly built competing heat sinks. Since the fan is positioned on top of the heat sink, the KÜHLER Shelf also provides airflow to near-CPU components, improving overall thermal dissipation and component reliability ideal for multi-core CPU builds suffering from high motherboard temperatures. This cooler also comes with seven copper heat pipes arranged in a space-saving configuration featuring with a narrow base that fits easily into tight spaces with tall chipsets and heat sinks by the CPU socket – great for replacements and upgrades onto densely packed motherboards for optimal heat transference.

Rounding out the series is the KÜHLER Flow CPU cooler, which features a vertical heat sink that can be re-positioned to cooperate with the case’s existing intake and exhaust fans. This cooler is built with a 120 mm PWM fan that works with the enclosure’s natural airflow capabilities and sets up a dynamic airflow pattern that sweeps through the entire case, without the turbulence or counter currents typically associated with other CPU coolers. At 122 mm wide and 157 mm high, it fits easily into standard cases without the need for unnecessary drilling and cutting. Additionally, the cooler comes with seven copper heat pipes for excellent heat transference, and includes rubber fan grommets to reduce vibration.

All three KÜHLER CPU cooler models can be mounted easily on the leading desktop processor sockets, including LGA 1366, 1156, 775 and AMD® sockets AM3, AM2+, and are compatible with Intel® Core™ i7, Core™ i5 and AMD® Phenom™ II processors. Additionally, all come with an easy-installation kit, featuring an included mini-wrench for simple, fast and frustration-free set-up. Antec’s KÜHLER line of high-performance CPU coolers is the first to offer this kit as an included component.

The KÜHLER Box, KÜHLER Shelf and KÜHLER Flow are all available for $59.95 through major retailers, e-tailers and distributors. Each model is backed by Antec’s Quality 2-Year (AQ2) Limited Warranty on parts and labor.