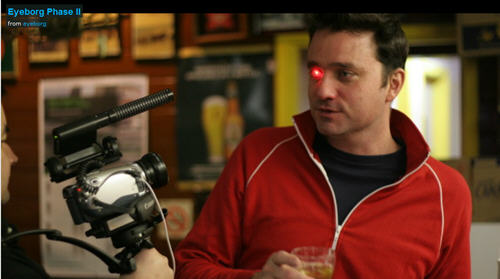 Meet Rob Spence, Canadian filmmaker and visionary. Due to a shotgun accident that occurred when Rob was 12, he eventually lost his right eye. Two years ago, he struck upon the idea to alter his eyeball prosthesis into a wireless eyecam which would stream video signals to a mini video receiver, and thus Eyeborg was born.

With the help of then unemployed genius, Kosta Grammatis, Rob set about to achieve this dream. The fact that he had no money to fund this experiment in no way detracted from his mission to merge his love of filmmaking with what is ostensibly a crazy idea.

Kosta Grammatis, a former SpaceX avionics engineer, was the lead designer for this project. He helped design a satellite that was put into orbit, so creating a bionic eye was going to be child’s play. The team was eventually rounded out with two more individuals: Martin Ling, whose specialty was in miniaturization, and Phil Bowen, a highly experienced Ocularist.

Eventually, the project got private funding and support from corporate partners which helped to provide the miniaturized camera and miniature wireless transmitter used in Rob’s cyborg eye. In tandem with the release of the latest revision 3.0 Eyecam, Rob was tapped by SquareEnix and Eidos to film a 12 minute documentary on the state of current human prosthesis technology timed for the release of Deus Ex: Human Revolution – a game about humans using artificial prosthetics to augment and enhance the capabilities of the human body.

** WARNING ** There is a short segment of video showing, I assume, Rob’s eyeball being removed during surgery which is definitely not for the squeamish. Video after the jump.

You can catch the details on the evolution of the Eyeborg project on Rob’s Eyeborg blog. The site includes information on the project, the project team, corporate sponsors and a multiple videos spanning the history of this interesting and ambitious project.