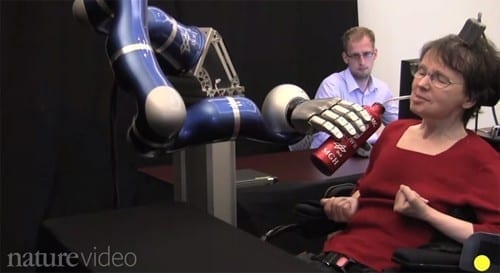 As fun as it is to joke about robots taking over the world Terminator-style, or turning us into half-human half-machine monsters like Darth Vader, it’s important to remember that robotics present a powerful hope for humanity in what they could potentially allow us to do. This is a prime example: a robotic arm controlled by a neural interface allowing a paralyzed woman to drink from a thermos by herself.

Cathy, the woman in the video, was implanted with the interface in 2005. She was able to drink coffee from the thermos on four out of six tries. I really hope those other two tries didn’t end with hot coffee poured in her lap. The team behind the technology is compromised of researchers from Brown University, whose next goal is to improve the speed and accuracy of the device. It’s a truly outstanding technology and that could benefit the world in monumental ways.

Check out the video below, which warmed my heart – a problem I hope to get fixed with my new robot heart.