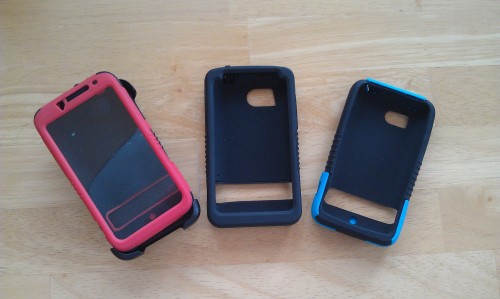 Trident Case sent me three different models of their cases for my HTC Thunderbolt, and I’ve spent the last few days testing out each one, comparing the pros and cons of each, and forming my opinions on them. The models they sent were the Cyclops2, Aegis, and Kraken.

Let me start this off by saying how very attractive I found each one of these cases. While they were not necessarily the colours I’d have chosen had I bought them, they definitely have aesthetic appeal, which can often be lacking in phone cases. In addition to the colours, the lines are clean, they look like something a professional would carry, and they just appealed to me on a very basic level. 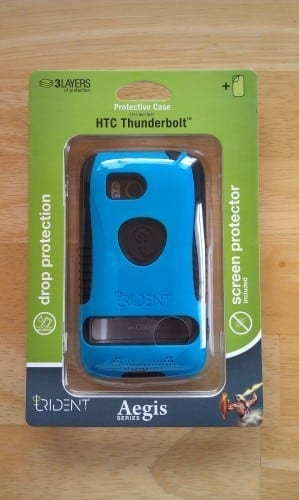 The packaging is very user-friendly, although I have to admit I did not notice the easy-open blister pack until after I had already cut the top off of one of them. This is a failure on my part for making an incorrect assumption, however. Trident has chosen packaging that is actually a dream to open if you open your eyes and do it how they intend you to instead of being impatient to get at what’s inside. I also like how simple the packaging is, letting the case itself do most of the talking. Not that there isn’t information available, and all of it is pertinent, it’s just that you can see most of it simply by looking at the case, front and back.

One of the things I love is that each case comes with either a screen protector (complete with cleaning cloth and application wedge) or in the Kraken’s case, a built-in screen protector. My phones tend to get abused, so a screen protector sheet lasts me maybe a year before it gets so scratched it needs to be replaced. Including one with each case is simply good form on Trident’s part. One thing I chose not to test on any of them, assuming at some point it will happen on its own without my going out of my way, is the drop protection feature. While I am confident that each case would, in fact, protect my phone in case I drop it, I was just skeptical enough to not drop it on purpose on the off chance it did not.

Let’s get to the actual testing, shall we?

I chose the Cyclops2 first, primarily because the one they sent me was all black, and I tend to gravitate toward black more so than colours. I really liked its three-part design, with a hard polycarbonate plastic outer shell and a soft silicon inner shell that cradles the phone. I also like that it has an opening for the kickstand, and a big enough opening for the camera lens and flash that it does not interfere with taking pictures. The power button lines up perfectly, and is actually easier to push than if I didn’t have a case on my phone at all. 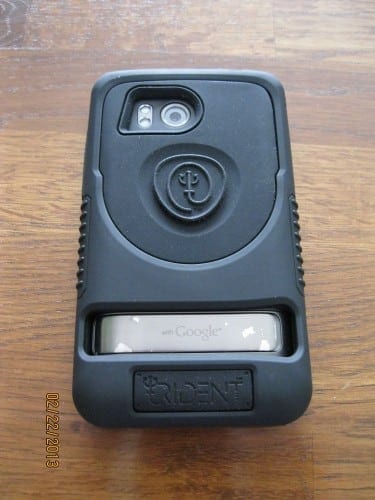 One of my favourite features is the covers for the headphone jack and power port, because those always end up getting lint and goodness knows what else in them riding around in my pocket. But while I love that those openings are covered, this was also a source of frustration for me. The headphone jack cover has a small tab which makes it easy to open, while the power port cover does not. I do not keep my fingernails long, so it took me at least three tries every time I wanted to open it. Since I rarely use the headphone jack, but charge my phone multiple times per day, this arrangement did not work for me at all. Another thing I wasn’t fond of was the volume button cover. It doesn’t always work easily, often requiring me to use my fingernail to change volume.

In general, though, this was my favourite of the three cases. The hard plastic exterior protects the phone without interfering with using it, the case does not add much bulk or size to the phone, and it slips easily in and out of my pocket while still being fairly non-skid on surfaces. 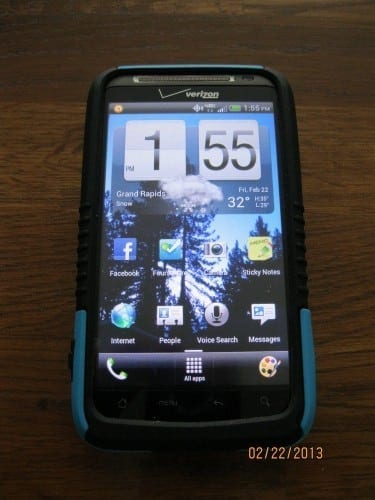 Second, I chose the Aegis. This one has two-piece construction: a soft silicon inner shell and a hard polycarbonate plastic outer shell (although the outer shell is softer than that on the Cyclops2). Where the Cyclops2 has a top and bottom piece that snap together to hold the phone, the Aegis simply comes up around the corners and snaps onto the back. This one also has great openings for the kickstand and camera, and covers for the headphone jack and power port. What I like better about the Aegis is the power port cover also has a tab, making it infinitely easier to open.

It was fairly difficult to get the phone situated properly in the case, but once I did, it didn’t feel loose or feel as if it would come off. The power button cover was difficult to use, often requiring a couple of tries to turn my screen on. The volume button cover, however, might as well not even have been there considering how easy it was to use. However, since I wake my phone up far more often than I change volume, I would much rather those things had been reversed. This one also slips easily in and out of my pocket, while rarely sliding on surfaces.

In all, on the standard scale of 1-5, I would put this at a solid four. The Aegis is available in black, green, red or blue starting at about $15.00 US.

Last is the Kraken. This one goes back to the three-part construction, and adds a holder with a belt clip. Like the other two, it has an inside sleeve of soft silicon and an outer shell of hard polycarbonate plastic (the harder plastic like what the Cyclops2 has). A major difference in this one is the screen protector is built into the top half of the hard case, so you don’t have to apply a screen protector sheet to your phone. Even using it with a film protector in place, it was incredibly responsive to my touch. 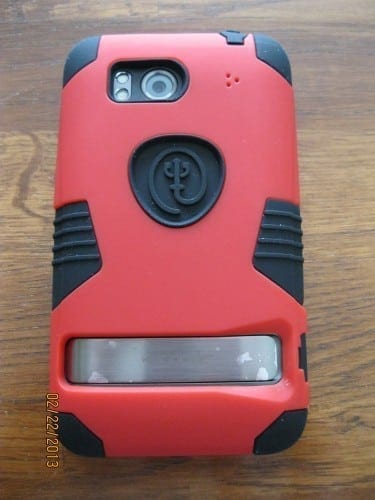 As with the other two, the openings for kickstand and camera are excellent. The headphone jack and power port covers both have a tab for easy opening, and the power and volume button covers mostly do not interfere with operation. One major drawback in the design is how far the top piece of the case comes around the screen. I had a hard time getting my finger high enough up on the screen to bring down the menu to access my notifications, often accidentally opening the clock instead. The menu buttons at the bottom are easy enough to get to, but the top pretty much always took several tries to access. 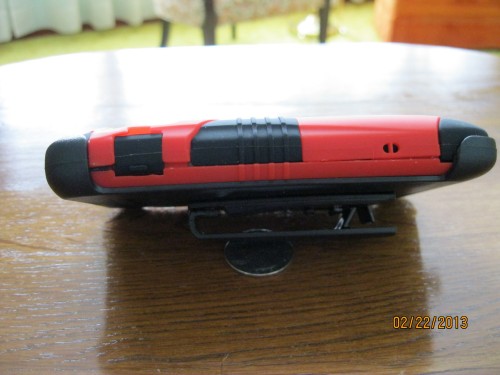 Another problem is the fact that I could not, no matter how many times I tried, completely snap the two halves of the outer shell together. There was always a gap somewhere, although not always in the same place. One of the things I noticed about the built-in screen protector is its tendency to pick up fingerprints and other smudges…it gets dirty far more quickly than the film-type screen protectors. But the convenience of having it be part of the case far outweighs the hassle of having to wipe it off on a regular basis.

What I like is the holder with the belt clip. In summer, I often don’t have pockets, or enough room in them for a phone if I have some. The clip fit over the waistband of my pants, on my purse strap, and on the edge of my bag with no problem, and also held tightly so I didn’t worry about it falling off unexpectedly. The only thing I don’t like is the phone has to be snapped into the holder with the screen facing inward, leaving you unable to check the time without removing the phone from it. I’m sure that is to further protect the screen from damage, but it is inconvenient for me. However, once the phone is snapped in place, it feels very solid and unlikely to accidentally fall out of the holder. The release lever is easy to use, but not so easy I think it will wear out any time soon. When using the case without the holder, it slips easily in and out of my pocket, but remains relatively non-skid on surfaces.

On a whim, I decided to see if either of the other two cases could be used with the holder. The Cylops2 cannot, but the Aegis fits nicely, albeit without featuring a notch for the release lever to click into as is on the Kraken, which of course is designed to be used with the holder. Even so, it felt pretty solid, and while I probably wouldn’t use it if I were at work, I wouldn’t hesitate to use it in my regular life.

One of the things I noticed about the Cyclops2 and Kraken cases is that they are definitely not meant to be swapped out with any frequency. Once the phone is in them, it is very difficult to pry apart the two halves of the case again… which is not at all a bad thing if you intend to use one case for a long period of time. I just wanted to mention it since it could be a factor for some folks.

In conclusion, I would have to say that these are some of the best cases I’ve seen. Yes, each one has its individual quirks that may or may not work for any given person, but overall their redeeming qualities far outweigh any negatives. If you’re in the market for a case, you could do a lot worse than Trident Case. I thank them for the opportunity to review some of their fine products.