Aside from people getting dangerously distracted with catching Pokemon in a graveyard, one other threat to your automotive safety is lower tire pressure. We’re told that we should be checking those PSIs on a regular basis, but how often do you pull up to a gas station to have a look? Take a far more proactive and convenient approach with the recently launched PAPAGO! GoSafe TPMS100 tire pressure monitoring system. It’s smarter than it looks. 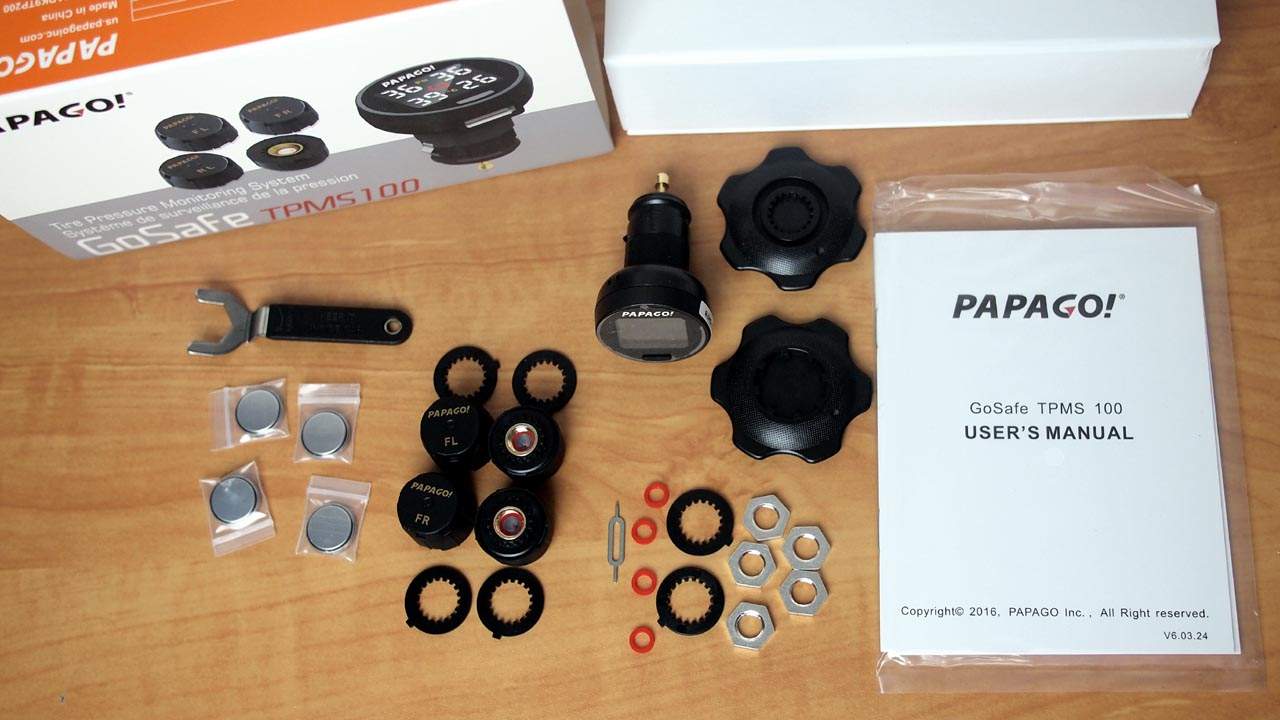 Regular readers of this site might already be familiar with the PAPAGO! brand for their extensive range of dashcams. Many of these dashcams come with safety features, like lane departure warnings or stop sign recognition. The GoSafe TPMS100 follows a similar philosophy, but in specific regards to the air pressure in your car’s tires.

Opening up the package can result in an initial state of shock. There are a lot of little pieces here, but it’s actually not nearly as overwhelming as you might think. There are four sensors to replace the valve caps on each of your four tires, along with the corresponding coin-style batteris, a set of nuts, a small wrench, and a tool for opening the sensors to install those batteries.

Of course, there’s also the user manual, as well as the receiver that plugs into your car’s 12V outlet. 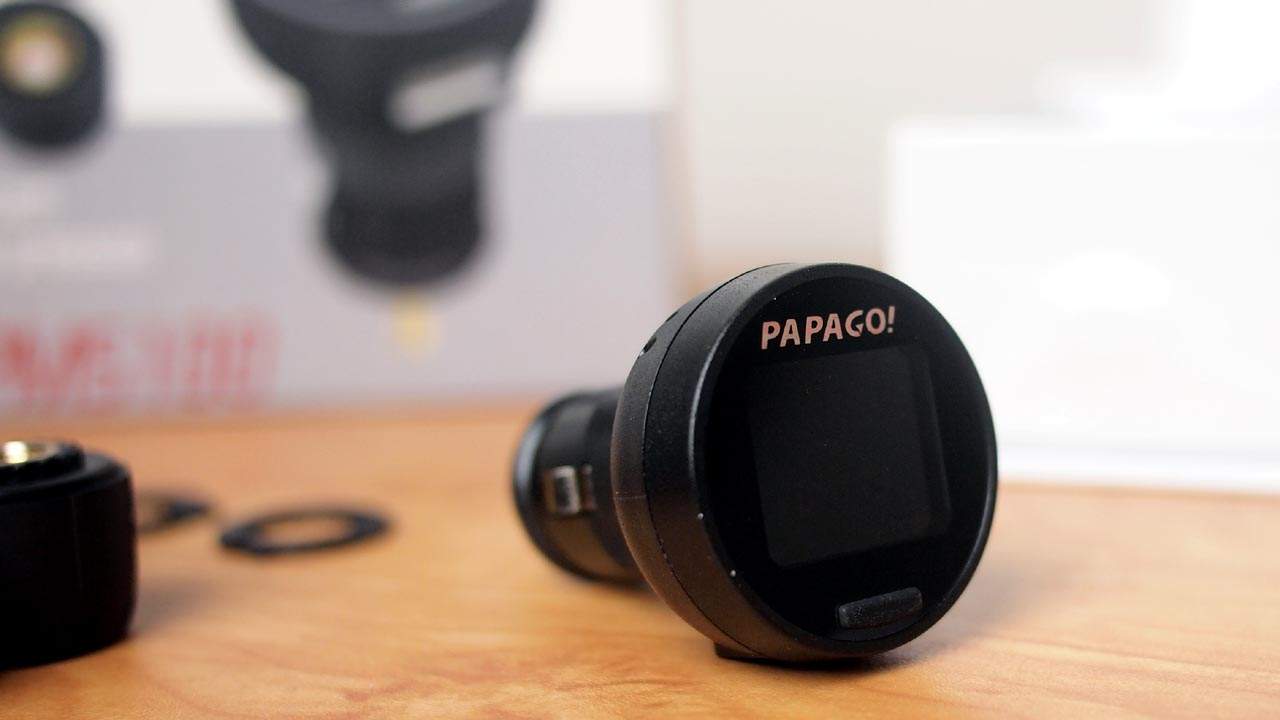 You may recall a couple of years ago when I reviewed the GoSafe TPMS 500 BT. The fundamental functionality here is the same: monitoring your time pressure in real time. The astronomical difference is that you don’t need to load up an app on your smartphone anymore and you don’t need to connect to the receiver over Bluetooth.

The GoSafe TPMS100 is remarkably more convenient, because the receiver that plugs into your car’s 12V outlet (“cigarette jack”) has a simple built-in display. As the information gets sent it from each of the four sensors (this all happens over a wireless connection, of course), this shows up on the little screen. By default, it’ll show your tire pressure in PSI, but you can switch to bars if you prefer.

PAPAGO! says that the batteries for each of the sensors will last between one and two years under regular use. The sensors themselves are said to be water resistant and dust-proof, so you shouldn’t worry too much about driving around with them. I would recommend against submerging them in giant pools of off-road muddy water though. 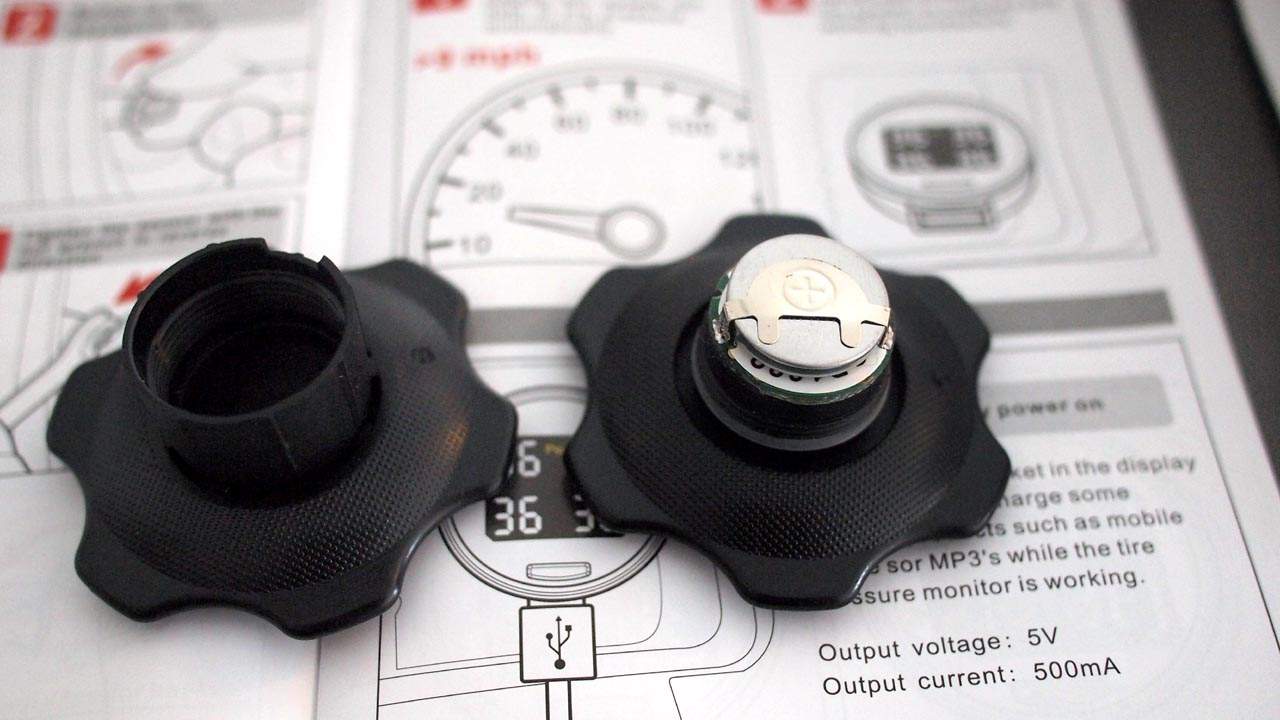 On paper, the installation process is relatively straightforward. You take off the valve caps on each of your tires and replace them with the TPMS100 sensors. They also “lock” into place with the provided bolts that thread in before you put the sensors on. The sensors ship without the batteries pre-installed, so you will need to take those sensors apart to put them in.

Thankfully, there are a couple of simple plastic tools included that align with the “teeth” on either end of the sensor. Not so thankfully, the sensor cover doesn’t pop off all that easily. The rubber ring, which is there to prevent water from getting in, can be a little grippy. I ended up using my thumbnail, running it along the edge of the sensor cover to pry it open.

This isn’t a huge deal, but I did keep spinning that screw thread around for far longer than I needed to until I realize it was already unscrewed and I just had to pry it open. Once open, it’s a simple matter of sliding in the provided coin-style batteries into each sensor. I found tightening the locking bolt with the provided wrench to be a little finicky too. This probably helps in the “anti-theft” aspect.

That’s what the sensors look like once they are installed on the valve stem on each tire. Yes, they stick out quite prominently and it doesn’t take much for someone to notice that you don’t have regular valve caps on there. I do appreciate that each one is clearly marked as to which corner it should go. The four sensors come pre-paired and pre-configured to work with the provided receiver.

Going for a Road Test

When you first start up your car after installing the tire pressure sensors, you’re just going to get four blanks. The numbers don’t start populating the four fields, corresponding to each tire of course, until you drive around for a bit. I took the car around for a short spin around the neighborhood and it only took about three or four blocks before I got all four numbers.

You’ll also notice that there is a USB charging port in the bottom of the 12V receiver. That’s good. What’s not so good is that it only outputs a mere 500mA (0.5A). Considering that most phone chargers are at least 1A and fast chargers can push 2.4A and beyond, that’s rather unfortunate. I did find that it was still enough to power a dashcam, but your mileage (terrible pun intended) will vary. Some of your in-car electronics might need more than half an amp. 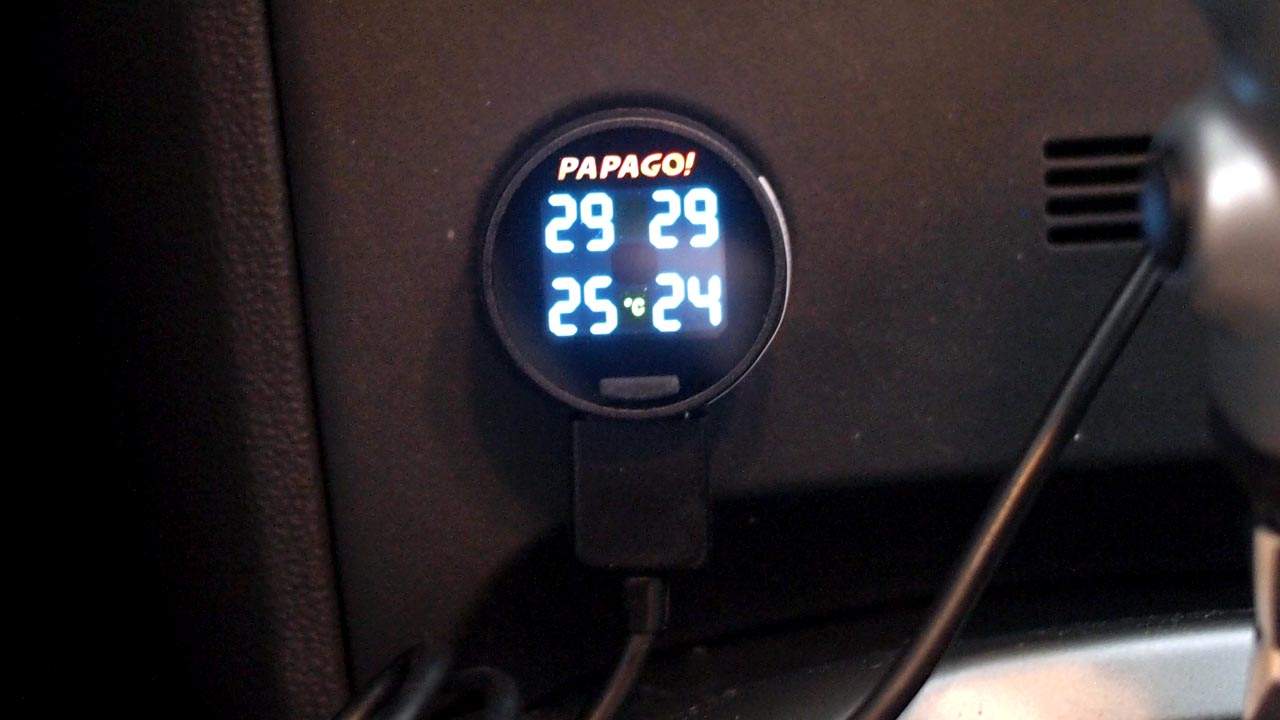 The interface is simplified to a fault. There is just one button for you to accomplish anything, so you’ll likely need to whip out the user manual any time you want to adjust the settings (which thankfully won’t be very often). If you hold that button down until you get a single beep, for instance, you can check on the real-time temperatures of each of your tires.

Holding the button down longer to get two beeps, three beeps, or more allows you to enter different setting configurations. You can adjust the upper and lower PSI limits before a warning sounds, for example. This can be a little painful, because once you enter the “mode” to change the limit, you have to mash on that single button to cycle through to your desired number. 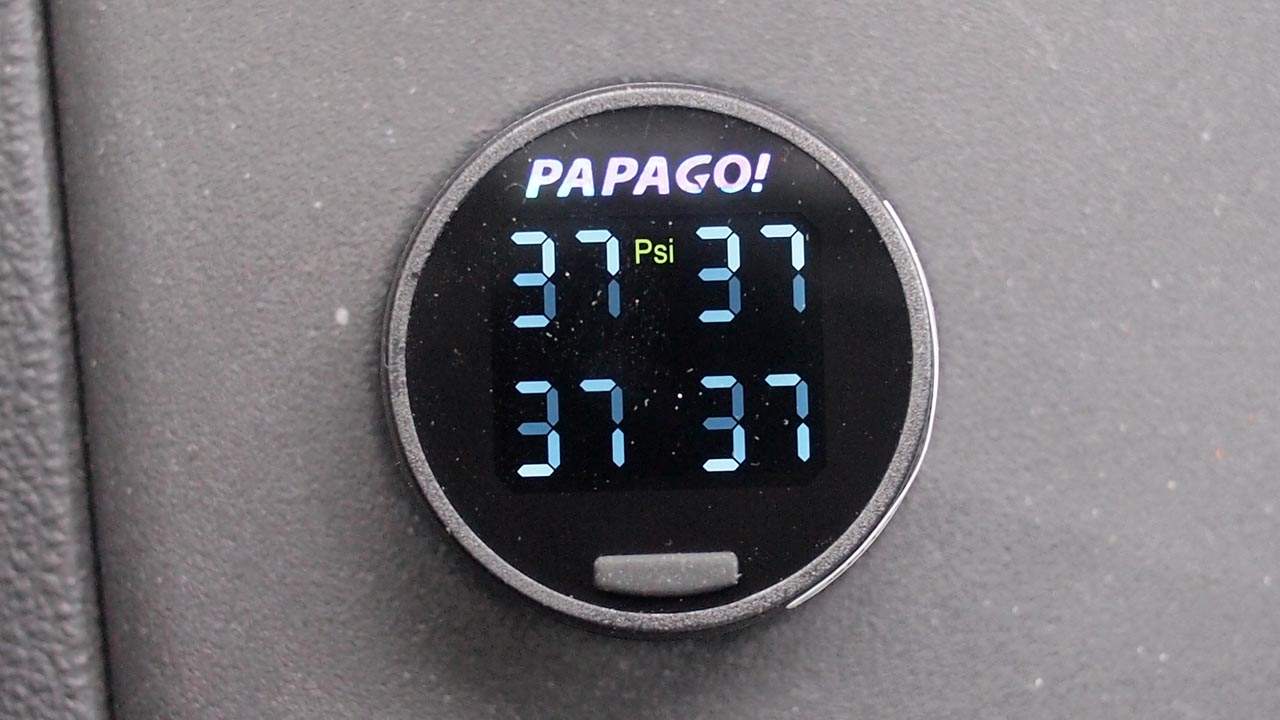 Many newer vehicles may come equipped with sensors that will provide a low tire pressure warning, but very few (if any) of these will provide real-time monitoring the way that this system does. The initial setup can take a few minutes and you’ll have to go through it again every couple of years to replace the battery, but if that gives you the peace of mind of knowing your tire pressure is all good, then maybe it’s worth it. I wish there was a way to temporarily turn off the display though.