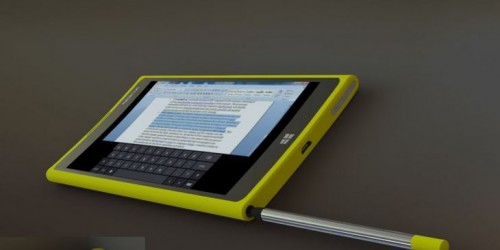 Bigger is better, right? That sure seems to be the trend when it comes to Android “phablets” like the 6.1-inch Huawei Mate and the Samsung Galaxy Mega 6.3, but fans of Windows Phone have only recently been offered a 4.7-inch smartphone in the Nokia Lumia 625. What if you want to go even bigger?

A recent leak has emerged on the Internet by way of “C Technology” and it reveals what could be the front panel of an upcoming Nokia Lumia smartphone. Or, given its much larger 6-inch dimensions, it may be more appropriate to call this a Lumia phablet (unless you hate the term “phablet”). Otherwise, aside from the enlarged size, the front panel on this yet unnamed smartphone isn’t terribly different from what we’ve already seen from Nokia and other companies.

The leaked image, shown above, doesn’t really tell us anything about the potential new Lumia, but there are some reports that this device is already in mass production. It’s said that it will run on Windows Phone 8 GDR3, which is the update that supports not only full HD 1080p displays, but also quad core processors. That should help bring WP8 up to snuff against its Google Android competitors, especially when you consider that the Huawei Mate and Galaxy Mega 6.3 are both only 720p devices.

I don’t know about you, but I’m thinking that these smartphones/phablets are getting too big for their own good. That said, if peripherals like smartwatches and Google Glass really take off, perhaps we really can get away with these larger mobile devices.