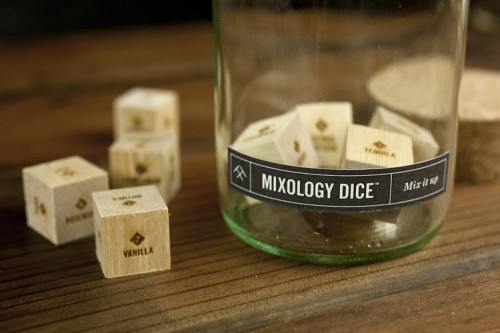 This past March, we took a look at a very successful Kickstarter campaign for Foodie Dice, created by Liz Downey. Since they had such a fabulous reception, she has expanded the line to include the original set of seasonal dinners, a booster set, and also beer dice in case you don’t know what libations to serve with your meal. Now, she is taking it another step further with Mixology Dice. 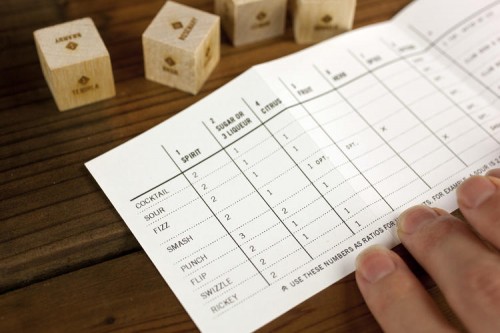 Mixology Dice is currently seeking funding on Kickstarter, and with just shy of two weeks left they have already surpassed their goal. Of necessity, this set works just a bit differently from the others since there is potential for some pretty spectacular taste failures in the world of alcohol and mixers (ask any college student).

Instead of the food categories on Foodie Dice, Mixology Dice feature a spirit, sugar, liqueur, citrus, fruit, herb, spice, and bitters on the individual die. Included in the package is a nearly foolproof chart which tells you which dice to roll to make the kind of drink you desire (Cocktail, Sour, Fizz, Smash, Punch, Flip, Swizzle, and Rickey).

The chart also shows you ratios of ingredients to use as well as giving you tips for mixing them, and the dice are numbered so you don’t risk rolling the wrong ones and ending up with something foul even if you’ve already partaken of a few.

There are 1.5 million possible combinations within the dice, and of course you can embellish or change things to suit your taste as needed. Obviously if your liquor cabinet isn’t well-stocked these probably aren’t going to help you… but they may inspire you to buy something new to try, and you could very well end up with a new favourite drink. One risk you run with 1.5 million possibilities is getting entirely too tipsy, however. But if that happens, just substitute sparkling water for the alcohol to ensure you remember what you tried.

Mixology Dice are made of laser engraved locally sourced wood, and made in the USA. If you’d like to be one of the first to get a set for your own, pledge at least $36.00 US before June 13th. Projected arrival is this coming September, and you get free shipping within the US (add $15.00 US for shipping elsewhere).