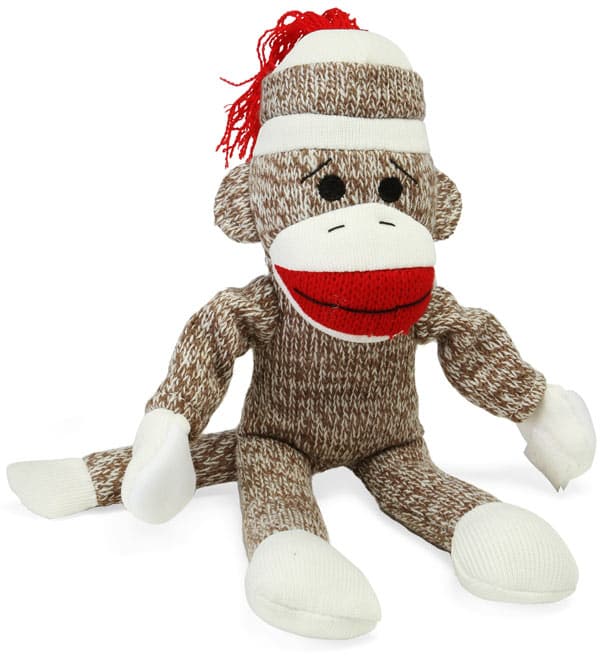 One of my most prized possessions is my grandmother’s sock monkey. She used to keep it in the trailer where they spent summers up north on the river, and only if we were really, really good all day were we allowed to play with it at night. In retrospect, she was brilliant… how better to ensure your grandchildren will not be obnoxious all day long than to reward them with something you made out of an old hunting sock? Well, whatever. It now sits on my dresser and every time I look at it I remember her, the summers we spent with them, and how special I felt when I had met her standards of behaviour and got to take it off the shelf.

This is not that sock monkey. This one is for the bad kids. The ones who never quite managed to behave properly. The ones who have now grown up to be adults who still can’t get the hang of it. And people like me, who have decided that behaving properly is overrated. This is the Screaming Flying Sock Monkey, and it does exactly what you think. It’s kind of a slingshot, really. Hidden inside its little arms are latex straps. Put each of his hands on your fingers and pull back on his legs, and he launches across a room. And screams while he flies. I am envisioning entirely too much fun and mayhem.

The monkey measures 12 inches long, and is soft like a sock monkey should be. Obviously you should probably not launch it at breakable items or people’s faces, but I realize things tend to get out of hand in situations like this. It’s recommended for children ages 5 and up, but if you’re like me your kid will have a pretty hard time getting it away from you.

Best part? This only costs ten bucks. Yup, you read that right. The Screaming Flying Sock Monkey can be yours for just $9.99 US. That’s cheap enough you could arm an entire office for when the boss is out!