All y’all have seen this, right? My first thought when it was unveiled at CES was that it was a joke. You know, like a commercial you’d see on Saturday Night Live, or something advertised on The Onion. Like that. And then I read further and find out that not only is this an actual product that they hope people will buy, but that people are actually so excited about this there was actual lamenting going on when they found out it wasn’t on shelves yet.

OK, here’s where I have to remind you I don’t have children. So maybe that’s it. But I have helped raise any number of children over the last 31 years, so I think I have something of a clue even if I don’t have my own. And it both fascinates and horrifies me that not only do people think it’s a good idea to let a two-year-old play with their $400 iPad, but that said two-year-old should do so while learning to pee. How is this even an option? Do you not see how horribly wrong this could go?

Sure, the iPad is mounted in the potty seat in its own holder. But if you’ve ever potty trained a child, you know their aim is, at best, erratic. That $400 iPad is NOT designed to withstand a dousing in urine. Let’s not even get into the creative “finger painting” kids sometimes do, shall we? Yeah, ok, it has a screen cover and guard, but I simply cannot see myself trusting them to guard my expensive electronics from the ingenuity of a determined toddler. The potty chair itself has a removable bowl and seat, as well as a cover for when it is not in use. The iPad stand is fully removable for cleaning.

If you are one of those people who actually think this is a good idea, you’ll be able to get one starting in March for around $40.00 US.

You know what’s funny? I don’t find this to be unreasonable at all… 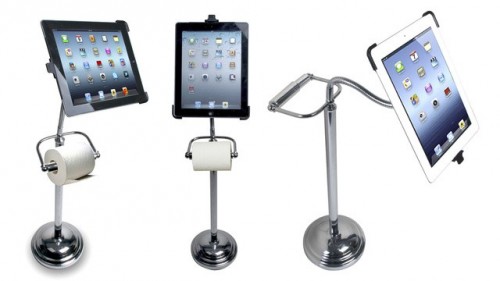 You know why? It’s for grown-ups. Grown-ups typically are capable of actually hitting the receptacle they’re supposed to be using to relieve themselves. They also don’t tend to get much on their hands… and if they do, they’re probably smart enough to avoid touching their expensive electronics until after they’ve washed them. In addition, this would be great for if you enjoy soaking in the tub. This also costs about $40.00 US, and is infinitely more practical as well as way less gross.