Let’s face it. While driving itself can be a pleasurable experience for a lot of people, getting stuck in traffic is no one’s idea of fun. It’s especially bad when you’re just taking your regular route to the office, only to discover that an accident on the overpass has cars backed up for miles. That’s where Waze can win and come to the rescue.

I was already familiar with what Waze was before I hopped in the rental SUV yesterday morning, but I had never used the mobile app myself. In speaking with the representative from Waze, I learned a lot about how this app could shave precious minutes off your daily commute and help you avoid some nasty congestion, all while gaining XP and connecting with the community. 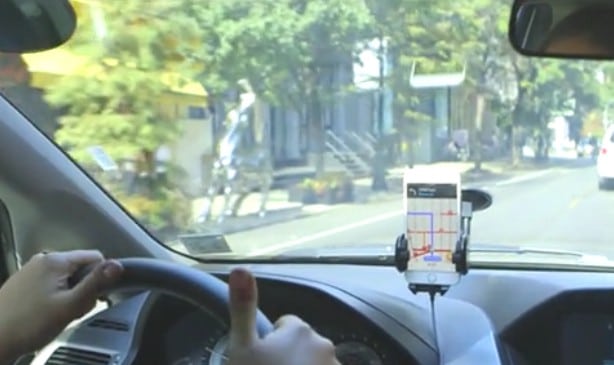 What’s interesting is that the maps in Waze aren’t actually built on anything. They didn’t take Google Maps or OpenMaps as a starting point, because the community actually builds the maps over time and keeps them up to date. This is partly through the Map Editor Program, which is powered by thousands of volunteers around the world.

But why would I want to use Waze over the GPS in my car or over Google Maps on my phone? The biggest key advantage you get with Waze is that it really is up to the minute, thanks to the reporting from the rest of the community. When there’s construction, an accident, black ice, or even road kill, other Wazers can report it and mark it as a hazard on the map — by tapping around the app or using voice commands — and the in-app navigation automatically helps you get around it. There’s also passive reporting, based on the periodic pings to mark the progress on your route. Taking longer than you should? It’s probably a traffic jam.

And Waze is designed to spread out the traffic: two users could get very different directions to get at the same destination.

You might recall when there was the unexpected snow storm in Atlanta. One story that was shared with me was how a Waze user managed to get home in 2.5 hours… which might sound like a lot, until you compare it with his non-Wazer friend who took 12 hours to cover the same distance.

To further bolster the utility of Waze, they’ve got the Connected Citizens Program (CCP) with two-way communication with more than 55 partners, including city and state governments, non profits and first responders. In Toronto, where the NBA All-Star Game was recently hosted, Waze already knew about the road closures and detours ahead of time, feeding that information into its algorithm for Wazers to avoid accordingly.

There’s also a new Waze Transportation SDK aimed at commercial companies to cherry-pick the features they want. This could be great for fleet management, ride-sharing (like Uber and Lyft), taxi companies, pizza delivery drivers and so on.

Of course, the real power of Waze must first come from its users and these users need to contribute that data (however anonymously they desire) to make this app as useful as possible. Waze is already big in Montreal (over 103,000 monthly users) and Toronto (over 175,000 users) and it’s picking up pace in Vancouver too with over 22,000 monthly users.

I could go into all sorts of finer details about ETA reporting, the gamification of the app (you get points for contributing to the community), and so on, but that’s not really the point. The point here is that Waze can be both fun and useful, making your drive a little more pleasant and it won’t cost you a dime.

Will I be using Waze myself moving forward? Maybe. I just got a notification for a map update for my car’s integrated navigation system, except ordering the maps (on an SD card in the mail, oddly enough) would cost me $150 and I wouldn’t get real-time data. Waze is free, it’s social, and it’s only getting more powerful.