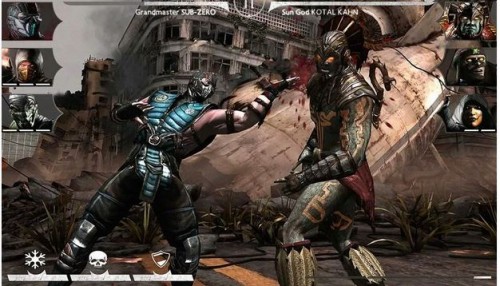 Toasty! The real version of Mortal Kombat X has been available on consoles and PC for some time now, but the fighting game engine can feel a little intimidating for a lot of gamers. If you’re looking to take a more accessible version of the gore fest with you on the go, you’re in luck. Mortal Kombat X Mobile is now available as a free download for Android smartphones and tablets.

As you might recall, Mortal Kombat X Mobile is a free-to-play fighting game that follows a similar model as we have already seen in WWE Immortals and Injustice Gods Among Us. You get 3v3 combat with a “massive roster” of kombatants. This includes familiar faces like Kano, Sonya and Ermac, as well as new characters Cassie Cage, Kung Jin and Kotal Khan.

While you don’t get a more traditional fighting game experience with Mortal Kombat X Mobile, you still get the infamous X-rays and fatalities here, plus plenty of guts, blood and gore. The iOS version has been out for about a month, so it’s about time us Android folks enter the battle arena too. It is a freemium fighting card collection game, so expect to open up your real world wallet to expedite your leveling up process.

If you’re ready to rip some spines and brutally break some bones, you can “get over here” to the Google Play Store to download Mortal Kombat X Mobile for your Android device of choice.