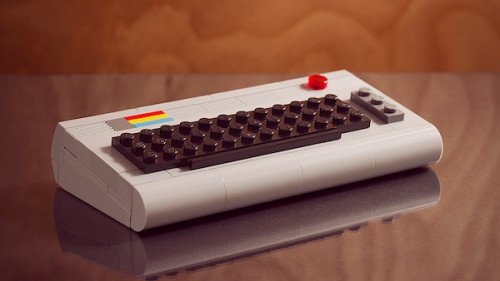 One of the things that never fails to amaze me is the number of things people think to create with LEGO bricks. When I was a kid, they were basic kits you could build basic things out of, unless you bought one of the kits designed to make a specific thing. Now, the sky seems to be the limit when it comes to what you can create. There are still kits, of course, but most of the things I’ve been finding are made by designers using whatever pieces they think they need. I think that’s neat.

Up first is something many of you are probably way too young to remember. But I’m old enough to have used one. It’s the Commodore 64, of course, but built out of LEGO. This one was designed by Chris McVeigh, and is actually available as a kit if you’d like to preorder one. And why wouldn’t you, really? Once upon a time, this was the best computer money could buy, at least for the general public. You can take a trip down memory lane for $46.50 US.

If the Commodore 64 doesn’t blow your hair back, how about an Apple II Plus? I used to use one of these too. This one comes from the mind of Chiu-Kueng Tsang, and also has a monitor and two disk drives. Those disk drives, if I remember correctly, were for 5.25″ floppies. If you look under the hood, it also has some of the internal hardware. This isn’t a full-size replica, but rather a miniature. It’s also not available for sale, but it is neat to look at. 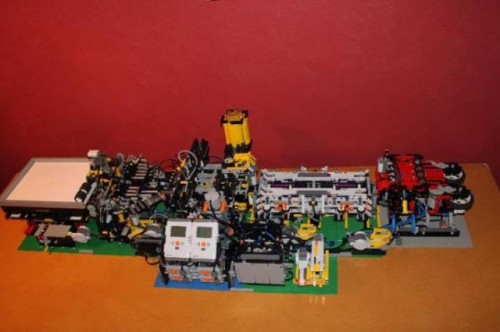 You’re looking at this picture thinking, “What the heck is that?” Well, let me tell you, this is something that is simultaneously pretty useless and entirely too neat. This, folks, is a machine made of LEGO that will fold and launch paper airplanes. Now you’ve seen everything, no? I like it a lot. Mostly because even when I was a kid, I was incapable of making a paper airplane that would fly more than about three feet. I bet this would do much better. This one was created by hknssn13, and is also not commercially available. But it’s still neat. 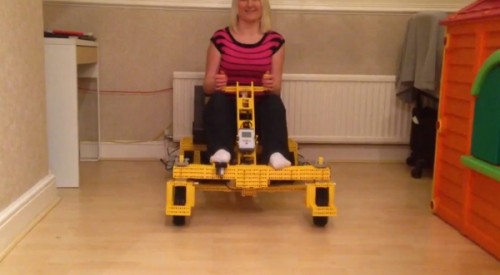 Here’s another thing I really kinda want to try out. It’s a go-kart made of LEGO, designed for a full-grown adult. It promises not to crumble into pieces, although I suspect that’s negotiable in the event of a crash. Simon Burfield built this one, which is powered by a 16 XL PF motors and 8 rechargeable power function battery packs. Again, not commercially available. But if I ever find out where Simon lives, I might just show up on his doorstep someday and ask if he’s free to play. 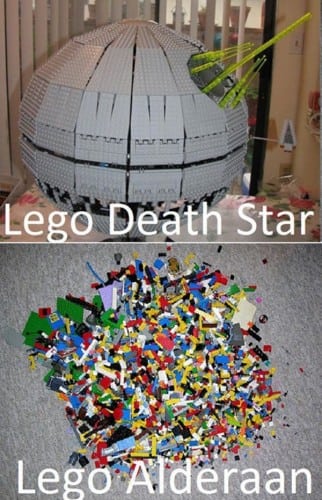 This just made me giggle. If you don’t get it, you must immediately rent or stream ALL of the Star Wars movies. Not only because then you’ll understand, but because they’re really pretty good. I have virtually no information on this, no idea who made it, and I’m sure you can’t buy it. But you can look at it and giggle along with me. Because, really, you kinda have to.

But wait, there’s more! Someone has created several scenes from Game of Thrones for your viewing pleasure. I have no earthly idea who that was, and I’m probably the last person on the planet who hasn’t seen the show, but I know it’s popular (and I’ve been assured I’ll love it once I get to it). The scene I’m including here is Jamie Lannister slaying the Mad King, but there are several more in the source article. Enjoy! 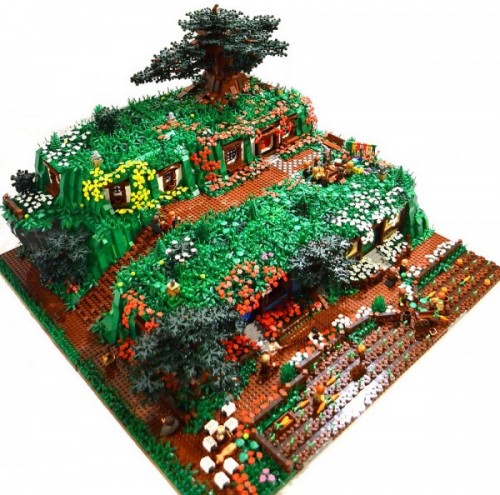 There’s still more. This is Hobbiton, created out of LEGO, and it’s amazing. David Frank created this one, and I bow to his detail skills. Along with Hobbiton in this grouping is a scene from Finding Nemo by Sean and Steph Mayo, a Batcave by Wayne Hussey and Carlyle Livingston, and two I’ve featured before: Hogwarts by Alice Finch and Ghostbusters by Alexander Jones. They are all incredibly impressive.

Speaking of The Hobbit/Lord of the Rings, here’s Smaug, crouched possessively on top of his immense pile of treasure. Created by Fat Tony 1138 out of LEGO bricks, some of which are wrapped in gold foil for the treasure, this one is one of the coolest creations I’ve seen. The treasure also uses items not made of LEGO, but we won’t hold that against him. After all, Smaug’s treasure didn’t just include gold bricks. 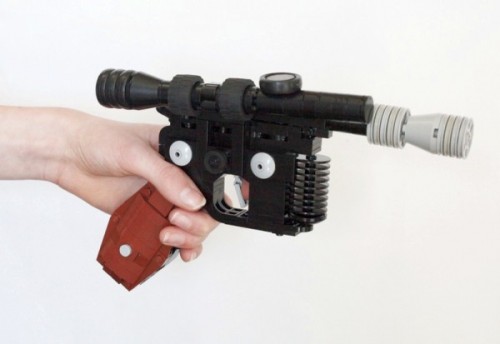 Since we’re on a movie theme, how about Han Solo’s DL-44 Heavy Blaster Pistol? Created by Logan (CaptainInfinity), this has some extraordinary detail, especially considering it’s constructed entirely of LEGO bricks and pieces. I wouldn’t recommend trying to actually use it, though…it looks like it could fall apart when you least expect it, leaving you at the mercy of Boba Fett. 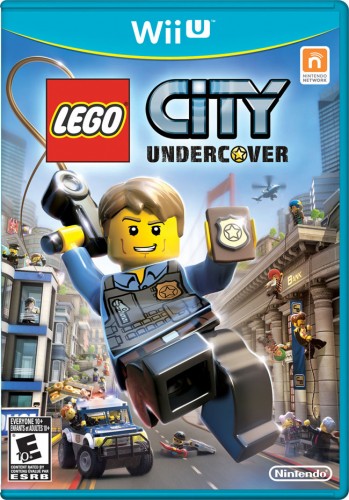 Continuing (sort of) with the theme…let’s look at LEGO City Undercover. This is a game, of course, but unlike all the rest of them it’s not based on an existing comic book or movie. Instead, this one carves its own niche with a take on the stereotypical hard-boiled cop movie. This is available for Wii U, and will cost you right around $50.00 US.

I’ve been giving all the love to Star Wars in this post, so now I’ll include something for the Star Trek fans. This is the trailer for LEGO Star Trek: Into Darkness, and I love it. Normally I don’t include videos here, but this one is really quite excellent. Of course, this mimics the actual trailer for the actual movie, created and filmed by Antonio Toscano and Andrea Toscano. I love it. 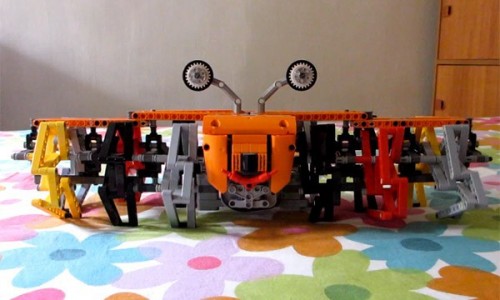 This creepy-crawly creature was designed by Lee Ping Ng, and uses LEGO Technic parts. It’s got twelve legs, and actually does walk around. Of course, this is another one that’s not actually available commercially. I think it’s kind of cute, in addition to being kind of creepy. Can you just imagine the look on your cat or dog’s face if you were to bring this home and let it wander around your living room? I think it’d be great. 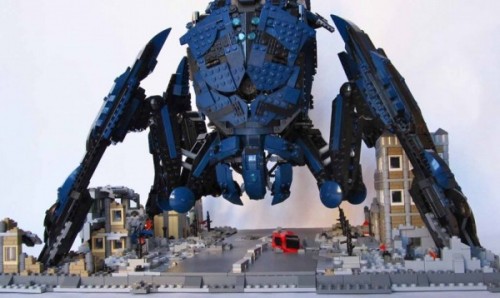 Are you familiar with Mass Effect? If so, then you’ll recognize a Reaper when you see one, no? This one was designed by ImagineBrickZone, and has a pivoting head, a movable face plate, and posable legs. Again, not commercially available, but you could maybe build one for yourself if you can figure it out from the pictures. And then build a LEGO city for it to destroy.

I saved this one for last, because I love it long time. It’s not just a LEGO Michael Jackson, it’s actually a video of LEGO MJ doing his signature dance moves to his own music. Priceless! Of course, this is done in stop-motion, but it’s really pretty darn fabulous. Thank you, Annette Jung, for totally making my entire week!