Search
Home
MEGATech Reviews
MEGATech Reviews: Tesoro Zone Balance Gaming Chair (TS-F710)
If you're ready to move beyond your standard issue office chair for something with a little more gamer cred, Tesoro can get you in the zone.
Pros
Cons
2017-12-28
9Overall Score

When we put together our computer setups, we typically take some time and care in selecting the various components. We’ll research things like speakers and monitors and keyboards, in addition to the actual parts that go into the computer itself. That just makes sense. But what about the chair under your butt? If you’re tired of boring old office chairs and want something with both more comfort and more personality, the Tesoro Zone Balance Gaming Chair TS-F710 could be just the thing. It’s not bad for productivity too… at least that’s what I keep telling myself. 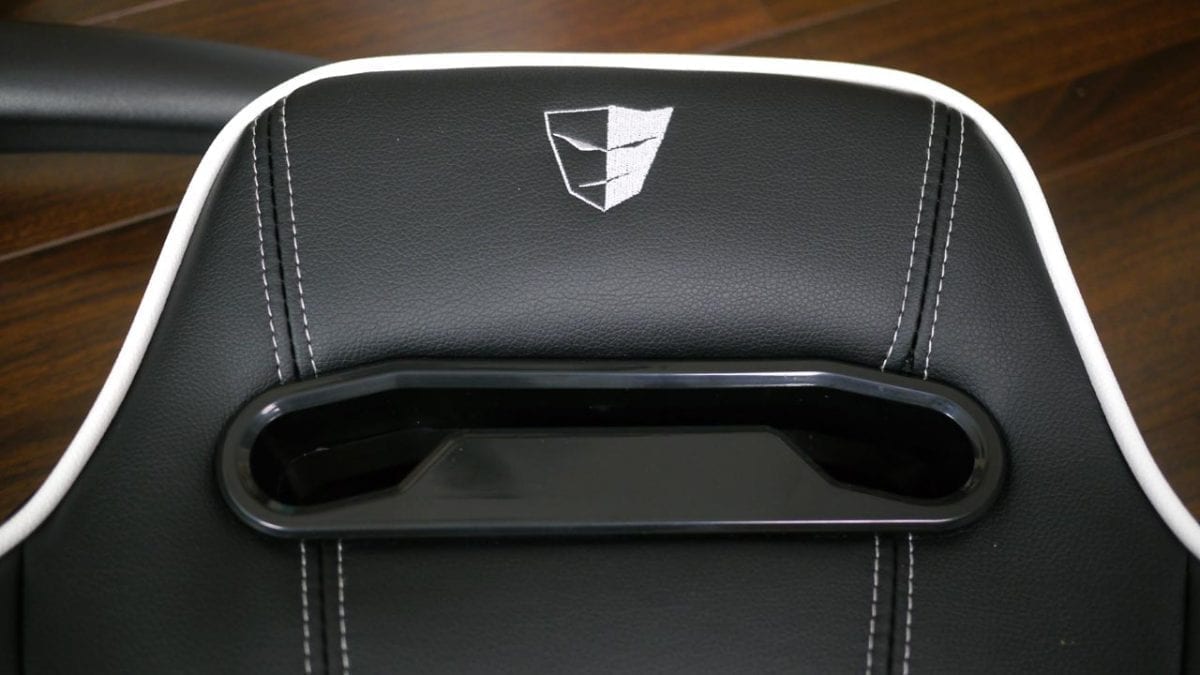 Tesoro might not exactly be a household name among a lot of people, but the company is aggressively trying to carve out its own piece of the growing gaming-centered pie. You may remember our reviews of the Tuned In-Ear Pro Gaming Headphones and the GRAM Spectrum RGB Mechanical Gaming Keyboard, for example. The Tesoro Zone Balance Gaming Chair continues with that same kind of philosophy, striving to “break the rules” with products that do the job well (and look good doing it).

You don’t want a flimsy chair with a weak structure, so it’s reassuring to see that this Tesoro comes with a “hefty steel frame constructed for long-term, rigorous use.” The same approach extends to the five-star steel base that can support up to 120 kilograms (about 264 pounds), so that should accommodate the majority of gamers too. The design is like most other gaming chairs on the market today, inspired by the racing seats you find in cars. If you’ve ever been involved in the “tuner” culture, then you’ll likely know about brands like Sparco, Bride, and Recaro.

Two things that I particularly like about the Tesoro Zone Balance are the stiff, “cold core” foam and the “beautifully designed polyurethane (PU) faux leather.” The fake leather still feels rather rubbery to the touch, but it feels thick and robust (read: durable). It’s also spill resistant, in case you get a little too excited around that can of Red Bull. 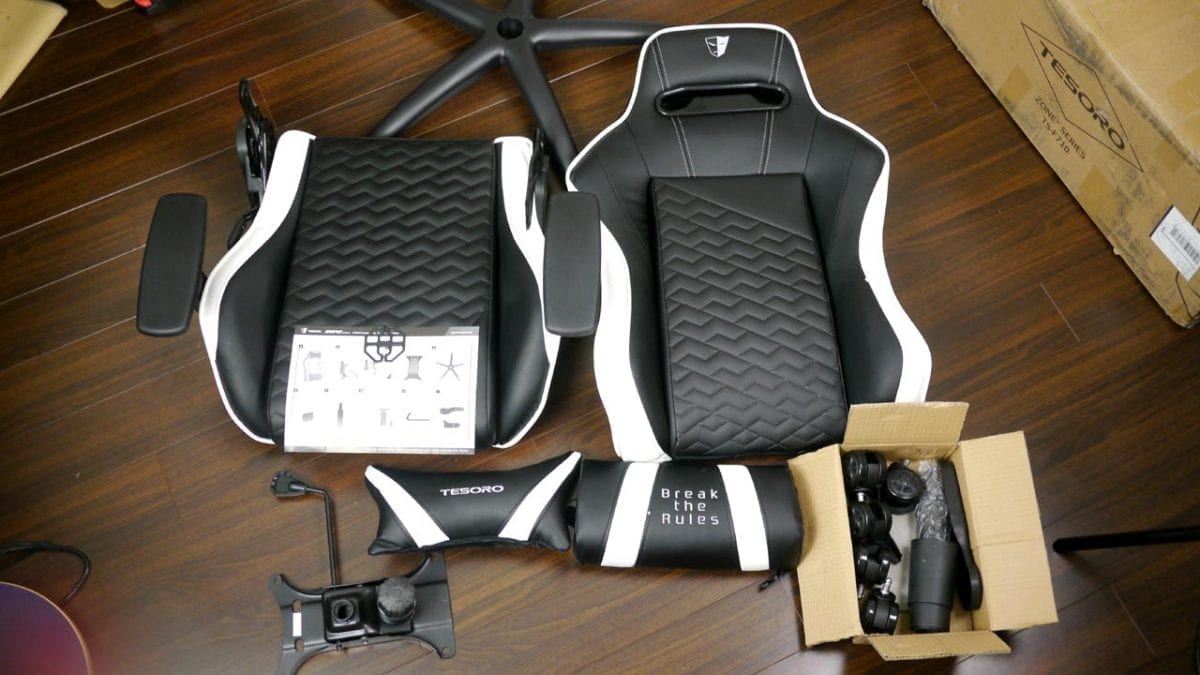 If you’ve ever put together a standard issue office chair, the Tesoro Zone Balance assembles in much the same way. The simple instructions fit on a single sheet and there really aren’t any surprises. It took me just under an hour, but I was working alone and I was stopping very frequently to take pictures. If I wasn’t snapping photos, I’m sure I could have put it together in a fraction of the time. 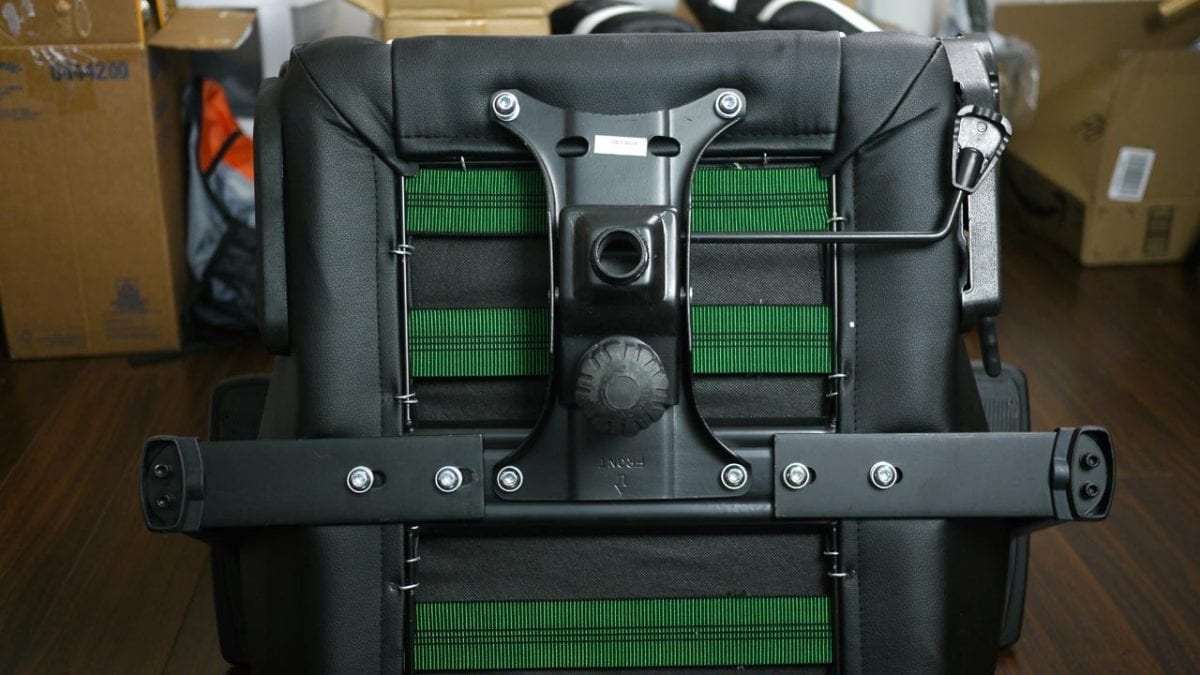 The steps are fairly standard with pushing the wheeled casters into the base, aligning the gas piston for the main vertical shaft, connecting the seat cushion with the seat back, and so forth. Along the way, I could see several areas where Tesoro has invested in higher quality materials and workmanship. I also saw several years that didn’t look quite as refined, like where the casters fit into the base, but these are generally not visible on the final assembled product. 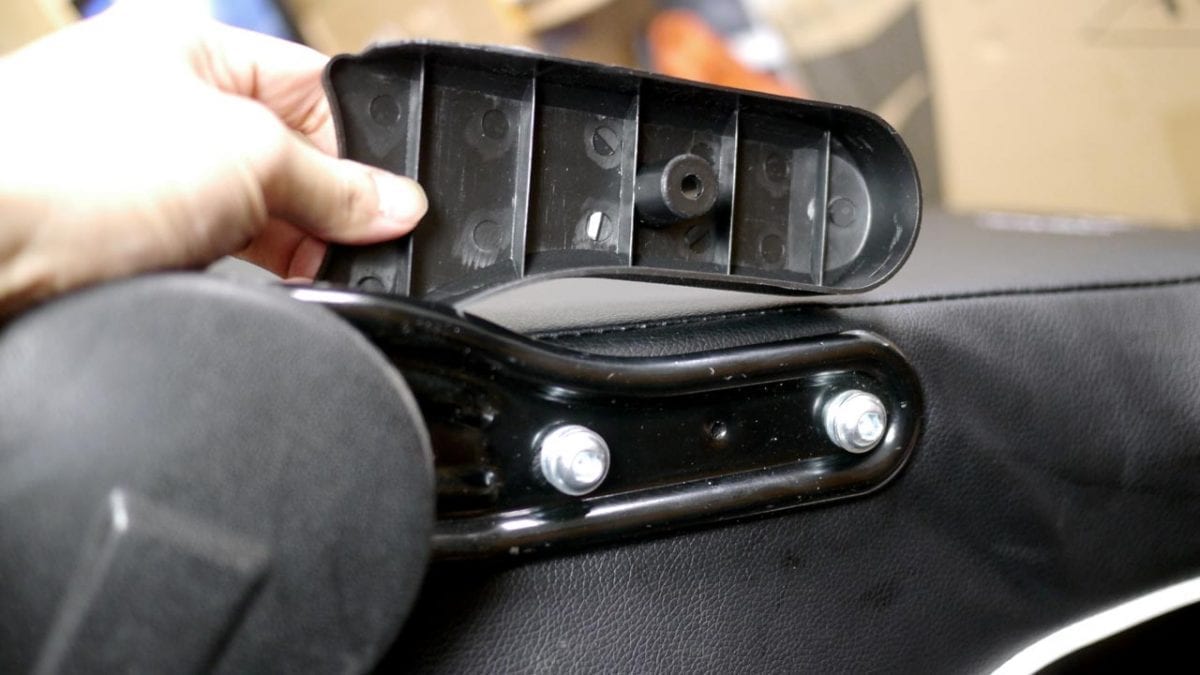 One of the final steps that did cause me some unneeded frustration and grief was installing the plastic covers on the either side. These cover up the metal arms that are used to attach the seat back to the seat cushion. There is a recessed hole where you need to insert a screw. I didn’t have a magnetic Philips screwdriver handy and the screw itself is very short, so this ended up taking far more time than it should have. There needs to be a smarter way.

Adjust to Your Preferences 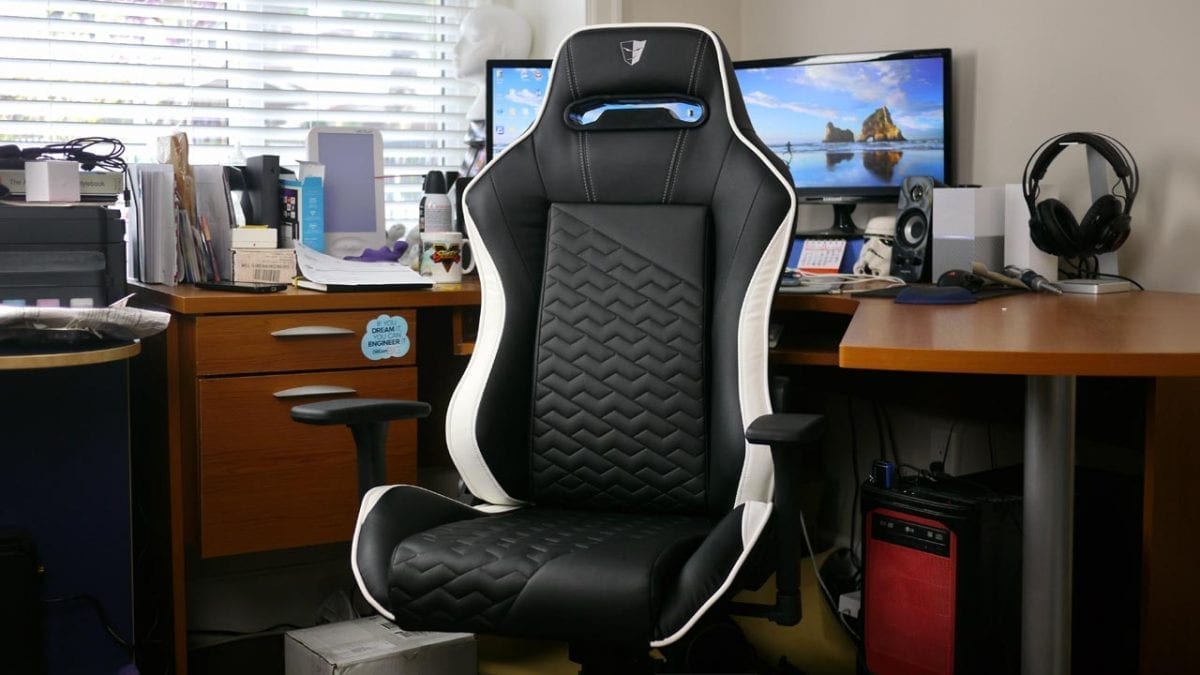 You’ll find a lot of the standard adjustment options on this gaming chair. As can be expected, you can raise and lower the seat (the lever is a little awkwardly placed toward the rear on the right side). What I found was that even at its lowest setting, it doesn’t sit quite low enough for the desk that I have in my home office. The armrests end up rubbing up against the bottom of my keyboard tray. Your mileage may vary.

There’s another lever, also on the right side, that you can use to recline the seat, just as you would in your car. What’s neat here is that you can recline it completely flat, such that it is parallel with the ground. I felt a little uneasy lying down like this, because I totally thought I was going to fall over backwards, but I never did. Again, your mileage may vary.

Unfortunately, aside from the little bit of space you get from the oval-shaped mounting holes underneath, you don’t really have any options for moving the armrests laterally. Body shapes will vary, of course, but I found the arm rests to sit too wide, too far away from my body. This is better for typing ergonomics, but what about when I actually want to rest my elbows on these things? 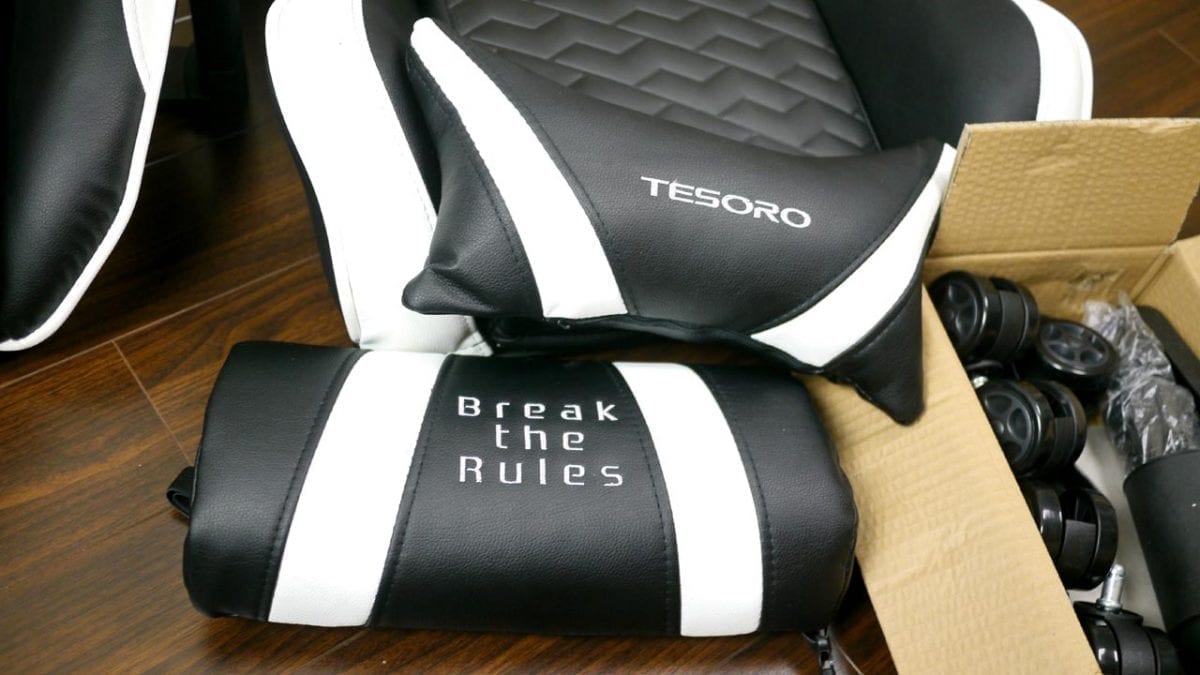 The two final points of adjustment, if you can call them that, are the neck/head pillow and the lumbar support pillow. Both are fully detachable (and re-attachable) by way of an elastic strap on the back. This isn’t exactly the most elegant solution and it’s a little cumbersome to thread the strap for the lumbar support, but at least they’re there.

As with the rest of the gaming chair, both pillows are very stiff and made with the same materials. This is very good for the neck/head pillow, as it “fits” into the groove in the back of my head quite comfortably. The same cannot be said for the lumbar support pillow. It’s far too large and dense for my preferences; it felt like it forced me to thrust my midsection forward and that’s just not comfortable. It didn’t take long before I decided to ditch it. 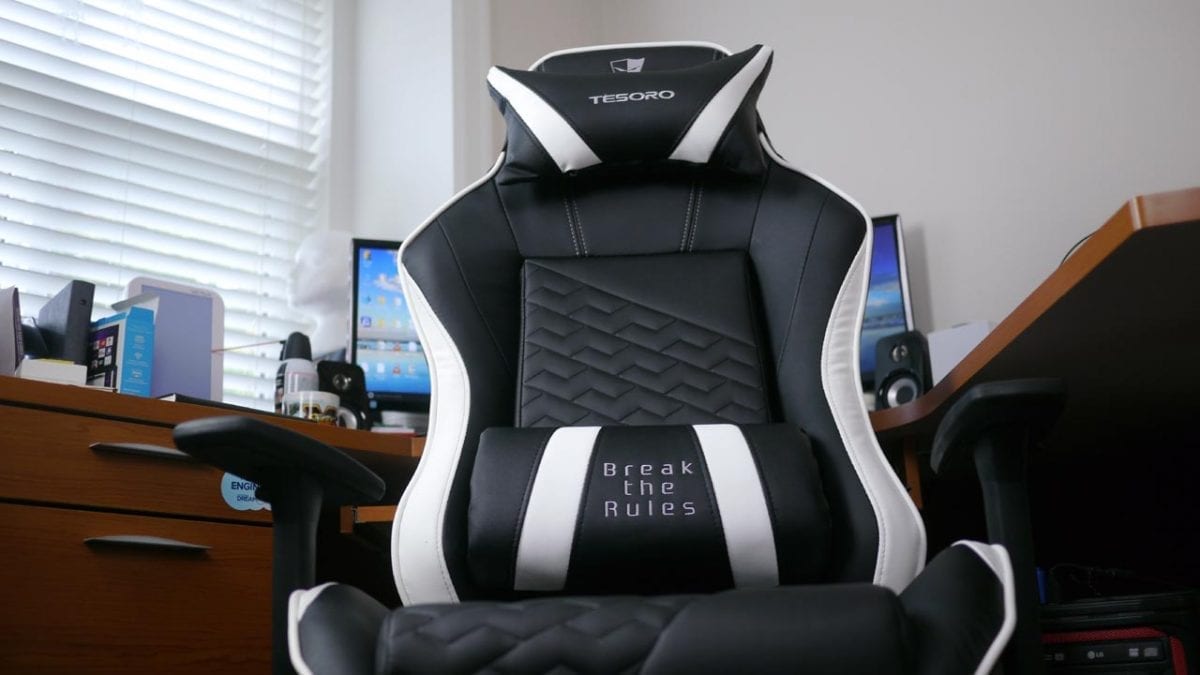 When I was younger, the seat placed in front of the computer was either taken from the kitchen table or it was one of those cheap fold-up chairs. A little later on, we graduated to an inexpensive student chair with a wheeled bottom and no arm rests. I think you know the type. When I finally got a space of my own several years later, I invested in slightly better office chair with arm rests, but the arm rests weren’t adjustable at all.

This gaming chair, even if you’re not totally into PC gaming at all, is a huge upgrade all around. One of the main problems that I’ve had with my last couple of chairs is that the seat cushion used rather cheap foam, so it totally lost its support very quickly. It doesn’t look like I’m going to have the same problem here with the denser foam, the steel frame, and the high quality PU faux leather.

I’ve got my gripes and there is room for improvement, but Tesoro has demonstrated it can put together a solid seat for all your PC-ing needs. The Tesoro Zone Balance Gaming Chair sells for $179.99 online in your choice of black/white (as shown), black/red or just black. That’s a little more than half the price of an equivalent Vertagear, for example, making it a pretty good value for what it is. And it looks pretty awesome too.