Big things come in small packages, right? While some people might say that the Polaroid brand is dead, the company has gone to great lengths to keep their products fresh, new and exciting. Perhaps one of the cutest and most compelling options to date is the Polaroid Cube+ lifestyle action camera, an updated version of the original Cube that now boasts more features. And they’ve unleashed a whole new family of accessories to go with your tiny video-shooting ways too.

The Lifestyle of a Colorful Cube

Let’s address the elephant in the room before we go any further. No conversation of “action cameras” would be complete without some mention of the GoPro line. The Polaroid Cube+ is not at all meant to compete against the more expensive GoPro models, like the $400+ HERO4 Black. Realistically, the form factor here is much more in line with the GoPro HERO4 Session, but for about $50 less. The Polaroid Cube+ is meant to be fun and easy to use.

The biggest difference between this model and older versions of the Cube is that the Cube+ gets Wi-Fi connectivity. This is a huge upgrade, because it means you can finally frame your shot and have far greater control over the settings. The video resolution maxes out at 1440p and you can capture 8-megapixel stills, but the camera always reverts back to the default of 1080p at 30 frames per second. And yes, it still has that terrific magnet on the bottom for added versatility.

Inside the box, you’ll find the Polaroid Cube+ itself, a rubbery bumper case, a simple carabiner and strap, a short microUSB charging cable, an 8GB microSD card (it supports up to 128GB) and the quick start guide. The camera itself is only splash-resistant; it’s not waterproof without the optional case.

As is plainly obvious, the Polaroid Cube+ is shaped like a rounded cube. I much prefer this remarkably compact approach over the bullet-style PAPAGO! GoLife Extreme, because it means it can be used in more places without much fuss. I have to say again that having the magnet on the bottom is a huge plus, though I would have preferred another one on the side for slapping onto poles and such.

On top, you get a total of two buttons. The large button is used for practically everything. You hold it for power, press it twice to start video recording, and press it once to snap a still. This simplicity is both a blessing and a curse, since it means you really do need to rely solely on the mobile app to accomplish anything beyond the basics. The other, smaller button is for enabling Wi-Fi.

Around the back, there is a single, semi-sealed hatch that opens up to reveal the microSD slot and microUSB charging port. Getting this cover off can be a little finicky, especially if you’ve got short fingernails. It got easier over time, but I imagine this also degrades the “seal” over time as well. The body of the Polaroid Cube+ itself is mostly soft-touch materials, giving some peace of mind should it take a small tumble.

By default, as mentioned, the camera will revert back to 1080p at 30fps each time you turn it on. If you want to fiddle with any of the other settings and access other resolution options, you’ll need the app. Available for both Android and iOS, the app also lets you change settings like limiting the clip length, enabling the timestamp and activating cycle recording. That last bit lets this camera work like a dashcam, overwriting the oldest clips when the memory card gets full.

Aside from this, of course, the most important aspect of the mobile app is the live view. By being able to see what the Cube+ sees, you can frame your shots and get them exactly how you want. There is a little bit of lag, since the connection is over Wi-Fi, but that’s a small price to pay. For my part, though, re-connecting over Wi-Fi and starting up the app each time become more trouble than it was worth. I ended up using the default settings pretty well the whole time.

Polaroid has an increasingly large range of first-party accessories for its Cube family of lifestyle cameras. These accessories are compatible with all the Cube cameras, since they are functionally and aesthetically the same from the outside. The Flexi-Pod is one such accessory. It takes the idea of the simple tripod (or Gorillapod) and leverages the magnetic nature of the Cube+.

The almost anthropomorphized accessory is covered in a rubbery material with a grippy texture on two of the five “arms.” Two of the other arms have a magnetic bump, while the final arm has an eyelet hole. There’s an additional magnet in the center. While I would have liked if each of the arms was a little thinner and a little longer, this design does make for a lot of creative possibilities. Each arm is fully flexible and can wrap around almost anything you’d like.

There was no real specific configuration that would mimic that of a mini selfie stick, but you could get pretty close. Bending all five legs down give the impression of a tripod, except with five legs (pentapod?), and since the magnet is in the center, the Cube+ mounted without fuss.

Still, the arms quite long enough for many possible applications. I also found that when I bent the arms closer to the “hands” end, the rubber would slide back to reveal more of the metal of the magnet. Functionally, this didn’t appear to have any negative impact. Visually, it just doesn’t look as good.

The video quality achieved on the Polaroid Cube+ can be hit or miss, depending on the lighting conditions. Unsurprisingly, the sound quality will leave something to be desired. Surprisingly, the camera uses a strange audio codec. The audio would not play in the default media player in Windows 10, so I had to open the clips in VLC. My video editing software also wouldn’t recognize the audio.

Under good lighting conditions at the local shopping mall, where they make significant use of natural light from above, the video quality is very good. I took advantage of the magnet to attach the Cube+ to the frame on my toddler’s stroller as we walked around. You can really appreciate the 124-degree wide-angle lens here.

Video quality under harsh sunlight is another matter. The colors can be over-saturated far too easily and the color temperature appears to be off, giving everything a bit of a pinkish or purplish hue. This video from Napa, California was shot handheld as I took a stroll down the street, over a highway overpass, toward a shopping complex. 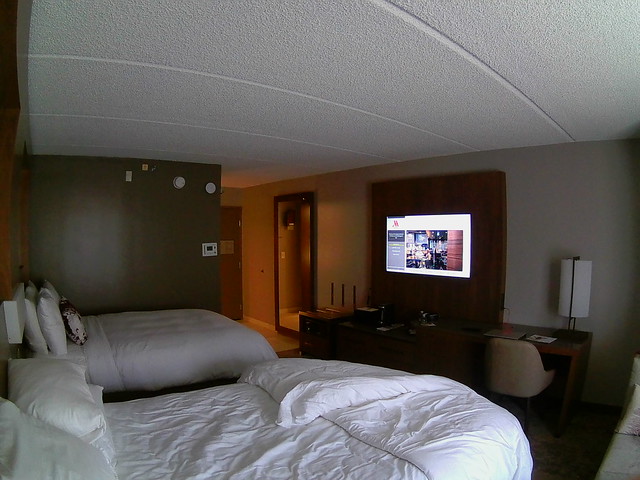 Photo quality is a similar kind of mixed bag. There is noticeable noise under lower light conditions, like the inside of a hotel room. The images default to the 4:3 aspect ratio at a resolution of 8-megapixels. A bigger problem I encountered is likely related to the automatic shutter speed in less than ideal lighting. Many of my indoor shots came out as a blur, since I probably moved my hand a bit too much.

You can likely minimize this issue by using the app and taking advantage of the self-timer function. Of course, “lifestyle” and “action” cameras like these are going to be utilized outdoors far more often than in the gloomy confines of a hotel room. A few more sample shots can be found in my Flickr photostream.

This is certainly a cute little camera and you can have a lot of fun shooting with it. That built-in magnet is a real selling point, because it means you can simply mount it to your helmet, handlebars or any other piece of metal with no additional hardware. The ability to shoot in 1440p is appreciated, as is the time lapse feature, but you’ll likely stick to 1080p most of the time. The compact size is a huge plus too.

Of course, this little camera is not without its shortcomings. The video quality can vary, the audio codec can be esoteric, and the complete reliance on the app can be inconvenient. I would’ve also liked if this camera was waterproof out of the box and not just splash-resistant. But hey, it’s cheaper than most and it can be a fun little toy to document your adventures. The wealth of accessories can further expand your creative possibilities.

The Polaroid Cube+ mini lifestyle action camera retails for $149.99 in your choice of black, red or blue. The Flexi-Pod tripod/mount accessory sells for $19.99 and comes in the same three colors.