By and large, the Internet-connected devices in our home connect to the web over Wi-Fi. And we have more wireless devices than ever before, including smartphones, tablets, laptops, smart TVs, set top boxes, IP cameras, smart speakers, game consoles… the list goes on and on. Addressing the myriad of concerns for the modern connected home is the Linksys Velop Tri-band Whole Home WiFi Mesh System, arguably one of the most robust home mesh network solutions available on the market today.

The Promise of Mesh Networking for the Home

If you live in a modestly-sized apartment on a single level, mesh networks probably aren’t going to be for you. Something like the Tenda AC9 AC1200 smart dual-band router is an affordable wireless networking solution that will handle the majority of these kinds of usage cases. If you’re a hardcore gamer, Linksys has a series of gaming-oriented routers too.

The Linksys Velop system is fundamentally different and it’s part of the bigger industry trend to move toward mesh networking for the regular consumer. The idea here is that you don’t work with a single router. Instead, you deploy a series of “nodes” throughout your home, blanketing every square foot in one cohesive wireless network. With the three pack, as tested, Linksys says you’ll cover up to 6,000 square feet. This overcomes some of the technical challenges of range extenders that can result in disjointed networks with different SSIDs and settings. 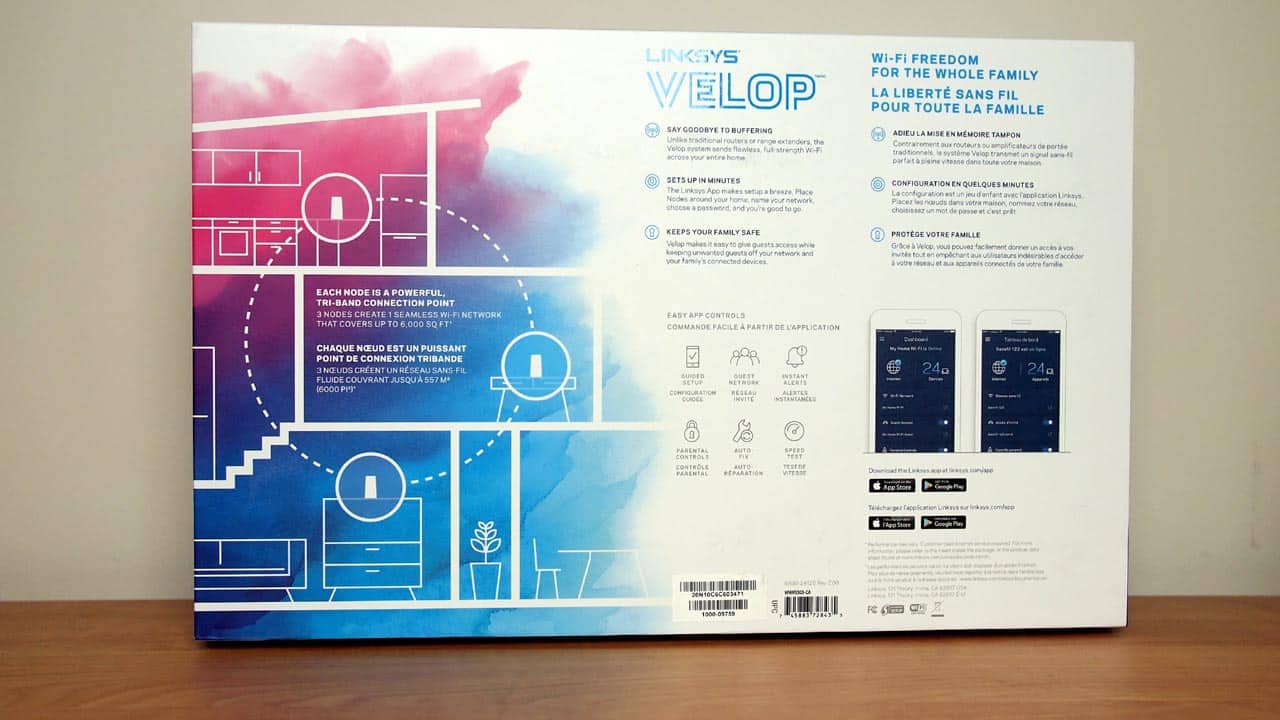 I won’t dig too deep into the technical specifications — you can check the product page for that — but I do want to highlight two very important details. First, this is a tri-band solution, meaning that you theoretically don’t sacrifice speed or performance based on whether you’re connecting to the primary node or one of the other nodes.

Unboxing and Getting Started 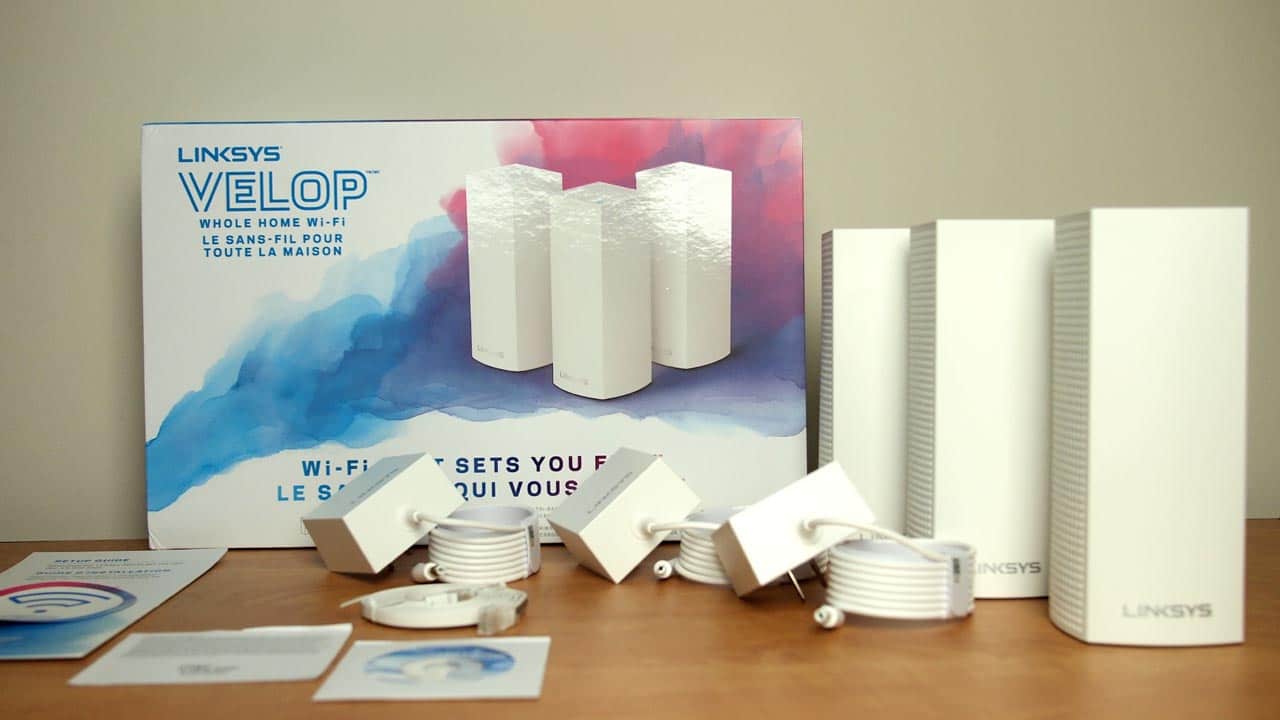 Something I mentioned during the in-depth unboxing video last month was just how elegant the packaging is for the Linksys Velop. It’s a clean white box with appropriate splashes of color and everything is laid out as simply as possible. Here are three nodes. And here are the three power bricks. And here’s the one Ethernet cable. That’s about it.

And while I appreciate that you don’t have to deal with a power “brick” for each node, per se, the power adapter isn’t exactly the smallest thing in the world. It’s shaped like a square with the prongs in the middle, so you end up blocking the outlets on either side if you’re using a power strip. I would have preferred a different design, like a Macbook charger, so you are less likely to run into this issue. 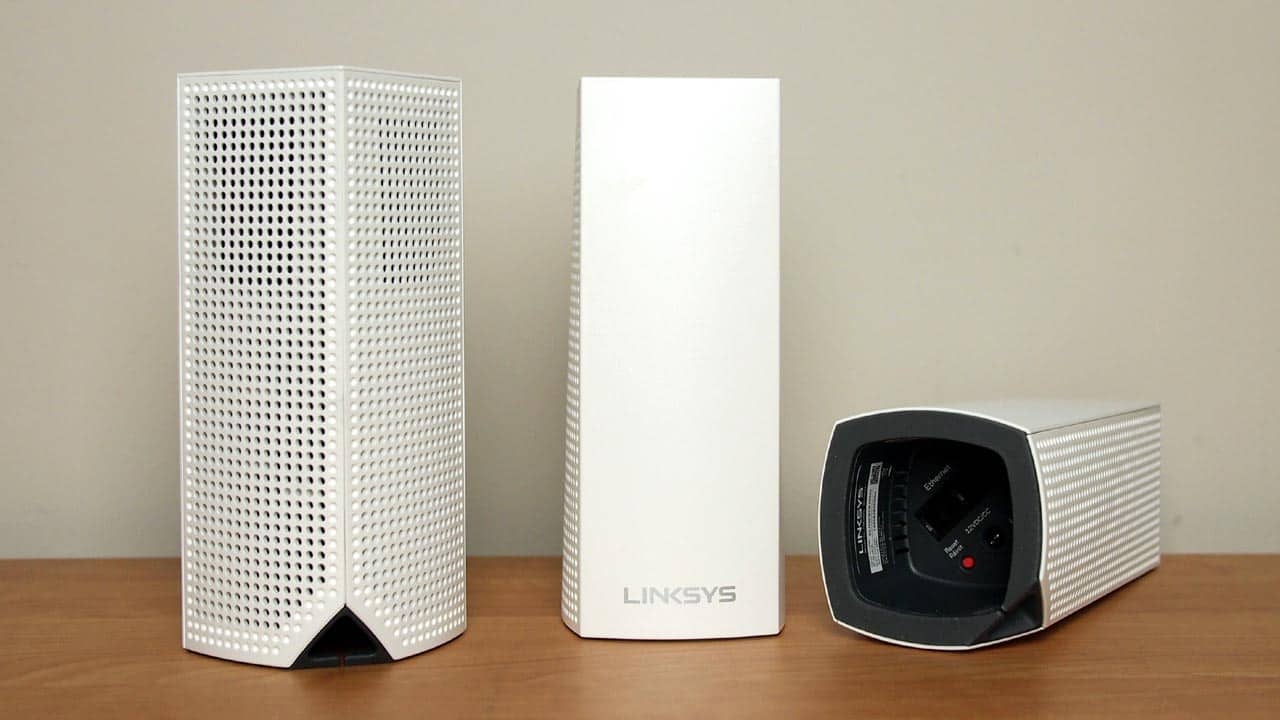 Under more traditional circumstances, you may have to run an installation CD on your computer, run the corresponding software, plug in a router, connect to the temporary network, run back and forth between your computer and the router, and jump through a few fiery hoops. That’s not at all the case here.

Even though the wizard does consist of a great many steps, it’s all run through a convenient mobile app on your smartphone or tablet. It’s not the steps are difficult or straining; it’s just that they are very granular, so even the least tech-savvy of consumers can figure it out. What I really liked is that your phone will automatically connect to the first node via Bluetooth when you run the Linksys Smart WiFi app to do the setup. No running back and forth.

The setup gets you define a new SSID, set a password, and run through a few configuration basics. When you’re done setting up the first node, adding the other nodes is far faster and easier. It’ll even tell you if your node placement is optimal. I will also note that each node only has two Ethernet ports, both of which can be used as either WAN or LAN.

Since you’ll connect one node to your modem, that leaves you with a total of five Ethernet ports across the three nodes. This can be a bit of a problem if you have too many wired devices. I had to move my Sonos Bridge, for instance, to accommodate my NAS and this resulted in some troubleshooting for my otherwise awesome Sonos system. This is something you’ll want to keep in mind.

While you can certainly run through your network management on your computer, I am thoroughly impressed with just how comprehensive the mobile app is for this purpose. You can do practically everything with it, with the noted exception of more granular parental controls. Toggle the guest network (and change the SSID/password), see what devices are connected, run a speed test and more.

If you are really the kind of person who likes to dig into more advanced settings, you may need to hop onto your computer. That would include features like port forwarding. Something that I really appreciated, though, was the device prioritization, which can be managed via the mobile app.

This lets you identify up to three devices that should always be given prioritization when they connect to the network and need to get online. Do you play Street Fighter or other games online where a compromised ping just won’t cut the mustard? Prioritize your console or gaming PC. Do you stream a lot of 4K content on your smart TV and hate when you run into buffering? Prioritize your TV. It’s really easy and it all works seamlessly. 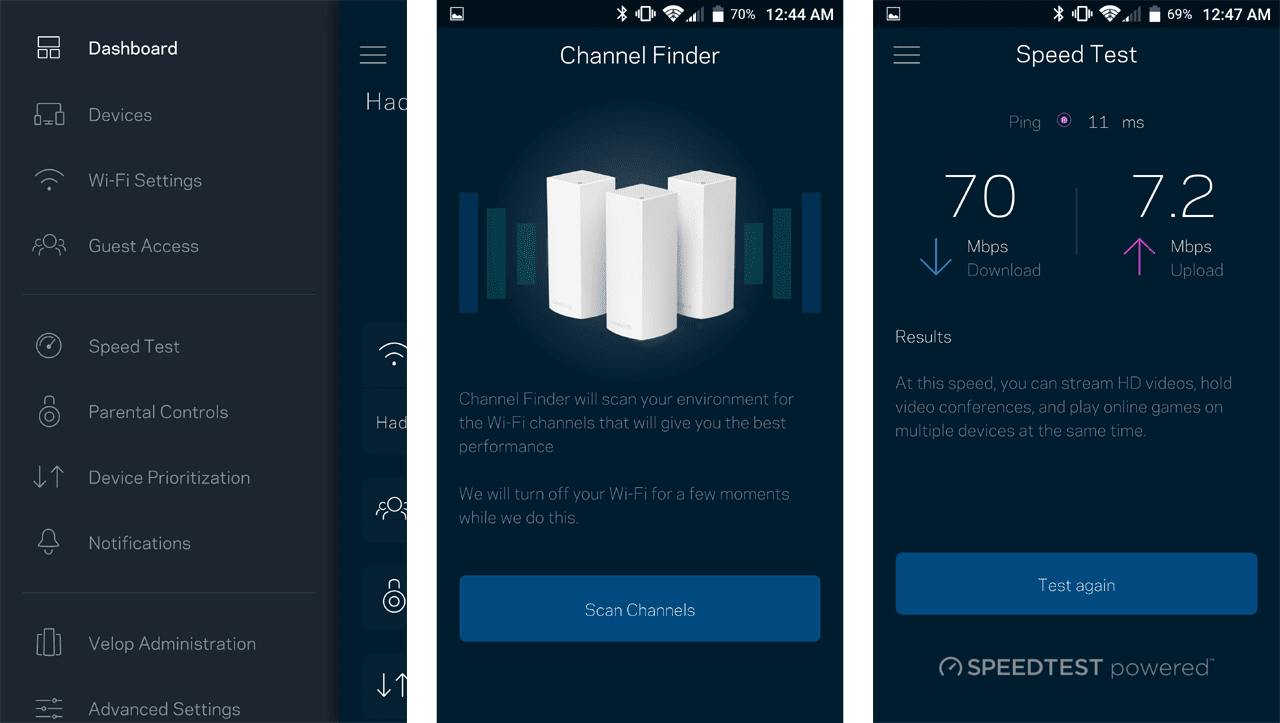 For the vast majority of consumers, networking equipment is the kind of thing that they want just to work. They want it to be like a microwave: fast and reliable. For power users who like flashing custom firmware or messing around in more complex UIs, the Linksys Velop may not be the best choice. For the rest of us, it’s pretty stellar.

While I can’t speak to whether three nodes will really provide you with 6,000 square feet of coverage, I can tell you that it easily blankets my 2,100 square foot home and then some. With every router I had used up until the Velop, I’d typically get a weak signal or lose a connection entirely if I ventured to the detached garage, for instance. That’s going through two sets of exterior walls, plus all the interior interference.

With one of the Velop nodes placed toward the back window on the ground floor, I’m able to get a connection in the garage. It’s not the best connection, but it’s definitely there. Throughout my actual home, speeds are fast and the connection is seamless. This is much better than using a range extender and with appropriately-based nodes, it can function almost like a powerline solution. 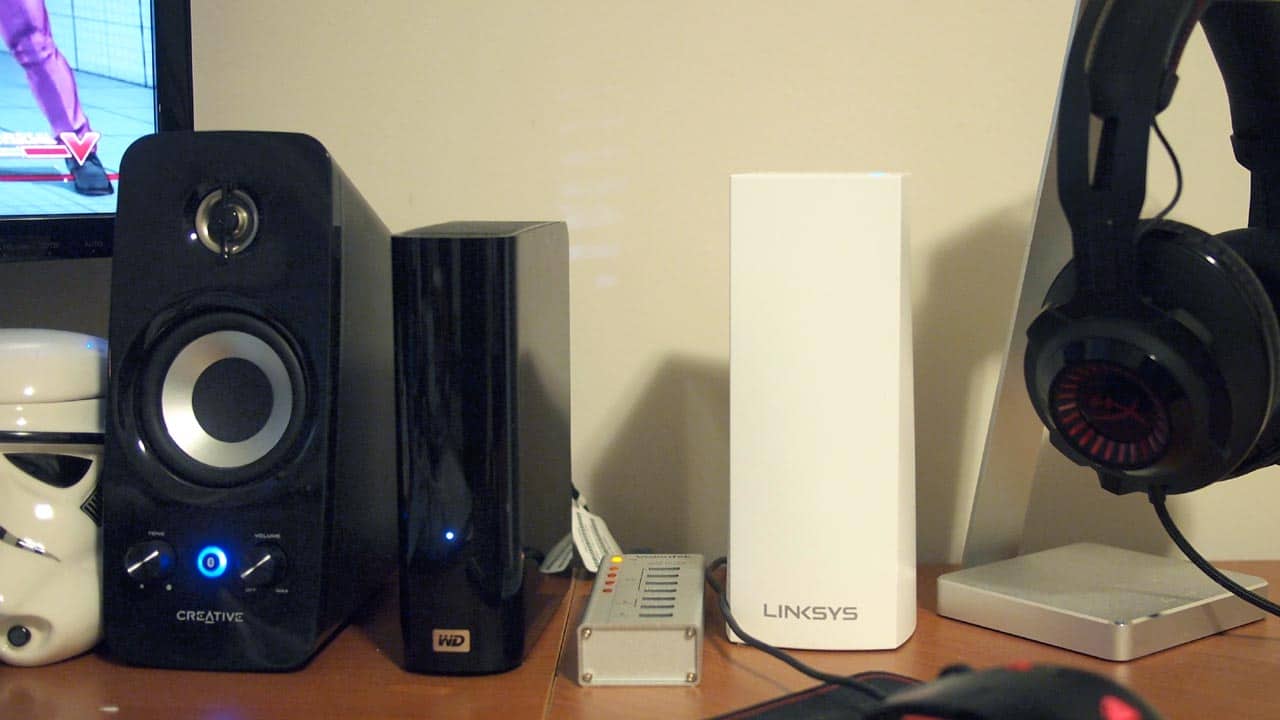 The greatest compliment that I can pay to this whole home mesh Wi-Fi system is that it just works. Using a mobile app and a Bluetooth connection to setup the nodes is remarkably convenient. The nodes themselves are cleanly and simply designed, not at all looking like traditional network equipment. And performance and reliability are truly top-notch. No more dropped connections, no more hopping between SSIDs. I really dig this. I just wished each node had more LAN ports.

The Linksys Velop 3-pack sells for $479.99, including a free Amazon Echo Dot (if you’re lucky enough to find it in stock). You can also pick up the 1-pack for $199.97 or the 2-pack for $349.97 if you want to add more nodes to your network, since the system is completely modular. That makes it pricier than Google WiFi or the Luma system, about on par with eero Home, and cheaper than the equivalent Orbi system. It’ll also be more expensive than most standalone routers, but a modular mesh system like this will offer far more coverage with very flexible configuration options.