You have all this great music on your iPhone or Android device, but sharing those tunes through the built-in speaker certainly leaves something to be desired. At the same time, you don’t want to necessarily rely on large and bulky speaker docks in order to raise the volume. For times like these, you may be interested in the Mini Rockers Bluetooth Mobile Speaker from Diamond Multimedia.

They’ve had a series of these mobile speakers for some time, but the speaker being reviewed today and won’t officially be hitting store shelves (online and offline) until some time in March. You’re seeing them here first, folks!

Features at a Glance

Just as we saw from the WPCTVPRO VStream Wireless HDMI solution from Diamond, the Mini Rockers Bluetooth speaker works first to ensure we get all the functionality that we need. The speaker itself has roughly the same footprint as a hockey puck, except it’s about twice the height. The speaker itself is a 3W unit, promising “clear, big, perfectly tuned sound.”

In addition to the speaker itself, inside the box you’ll find a 3.5mm stereo cable and a microUSB cable for charging. There is no included wall adapter, so you’ll either charge this speaker through your computer’s USB port or use any variety of USB wall adapters that you may have. You can also use it with a charging system like the IDAPT i4. The internal rechargeable battery is rated at up to 10 hours of continuous use.

Perhaps one of the greatest advantages to this speaker, aside from its very small size, is its versatility. There are actually three ways that you can use the Diamond Mini Rockers Bluetooth Speaker. Naturally, as a Bluetooth speaker, it can connect wirelessly to your smartphone or other Bluetooth-enabled device to stream audio that way.

Alternatively, there is a 3.5mm stereo jack that you can use to connect this speaker to just about any audio source, as well as a microSD (TransFlash) memory card slot. Simply load a memory card with all of those MP3 files and it’ll play to your heart’s content.

To switch between these different modes, there is a switch on the underside of the speaker. There are three positions: Off, MP3 and Bluetooth. The MP3 setting actually serves double duty, as it is used for both the audio-in jack and the microSD card slot, giving priority to the former over the latter.

Diamond has kept the control scheme relatively simple on this Bluetooth speaker. You get the usual pause/play button for your music control, as well as buttons for going to the previous track or to the next track. However, those same two buttons are also used for adjusting the volume; you simply hold the button down to change the volume.

While this helps to reduce the number of necessary buttons, it can create for a somewhat frustrating experience at times. If you want to just increase the volume a little bit, for example, you may accidentally advance to the next track instead. This is less of a problem when you’re using Bluetooth, as you’ll likely be doing more of the controlling from your smartphone, but it can still be troublesome. It should also be noted that while it is convenient to play music from a microSD card, you don’t have much control for the audio playback. It’ll simply play the MP3 files in order with no option for shuffle or repeat. When you don’t have a display, that makes things difficult.

Since this is also a Bluetooth speakerphone, there is also a hardware button for taking and hanging up on your routed phone calls as well. 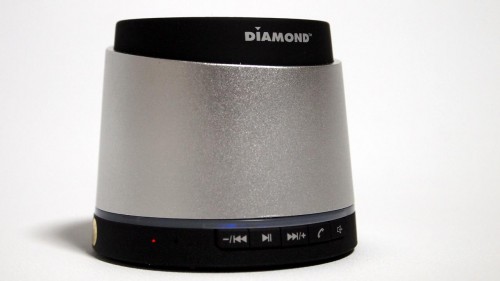 But how does it sound? I have to admit that I didn’t have the highest of expectations, but there actually is a decent amount of punch to this little speaker. It can be a little tinny at times, but it is a definite improvement over the speakers that you’d find on most consumer laptops for sure. It actually gets quite loud and provides a decent amount of bass.

I ran the Mini Rockers Mobile Speaker through the same kind of playlist I used to test the Antec SP1 speaker, including rock, electronica, hip hop, and more. Understandably, the sound starts to distort and crackle at the higher end of the volume spectrum, but if you keep everything under about 80%, this is quite the impressive little speaker. There is a fidelity to it, despite being quite small and producing an impressive amount of sound.

There was no distinguishable difference in audio quality when playing the same files via microSD, audio cable (connected to an iPod nano), or streamed via Bluetooth from my Motorola RAZR HD. The Bluetooth range was quite good too, keeping up a steady connection well into the claimed 30 foot range.

If you’re expecting to get ground-rattling bass like how you would with a much larger and much more expensive speaker system, then you’re going to be disappointed here. However, if you’re looking for a tiny speaker that you can easily toss in your bag and take to the beach, giving you a variety of ways to stream music through its 3W speaker, then you’re going to be quite happy with what Diamond is bringing to the table here. The versatility of the microSD slot is particularly valuable, along with the wireless Bluetooth experience that we all love and appreciate.

Given that other speakers from Diamond in this range sell for $30-$50, I’d expect this little Bluetooth wonder to be much the same. That’s quite the bargain, giving you a great way to enjoy your music at home, on the road, at the park, or just about anywhere life’s road may take you. Rock on, Diamond. Rock on.