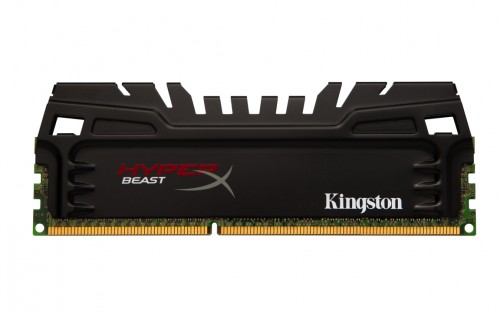 Kingston has several series of RAM under their HyperX brand. These focus on performance, low-voltage, and value pricing. Kingston now looks to build on the Predator family by unleashing the HyperX Beast lineup with a focus on high-capacity.

The new Kingston HyperX Beast lineup will come in kits of 8 GB to 64 GB and frequencies of 1600 MHz to 2400 MHz. Just because the series is about the higher capacities doesn’t mean you have to give up performance. To separate the Beast, the RAM sports new aggressively design heatsinks.

As always, Kingston backs their RAM with a lifetime warranty and tests for support with both Intel and AMD. The HyperX Beast lineup also has full support of XMP. Kingston fans who need a large capacity kit for their systems need look no further.

HyperX Beast is part of the Predator family, the premiere memory line offered by Kingston for power users. HyperX Beast features kits up to 2400MHz for faster processing times in applications requiring maximum performance, and in capacities from 8GB-64GB. The new heatspreader color and design adds diversity and character to the current HyperX memory offerings. It is designed to work with third- generation Intel® Core™ i5 and i7 processors as well as the latest AMD A-Series processors. For added benefit, HyperX Beast is Intel XMP ready so users can easily achieve the best performance optimization by simply selecting a speed profile, hand-tuned by Kingston engineers.

“We use the best performance-yielding components to build memory that is capable of achieving high speeds” said Mark Tekunoff, senior technology manager, Kingston. “The name Beast speaks for itself. The modules exemplify high-performance memory with the highest capacities available on the market today and an awesome design that will look great in your system.”

Please check your favorite Kingston e-tailer or reseller for pricing.