A couple of weeks ago, I was having a conversation with my brother about smartphone market share. He’s not the most techie person in the world, but he knew that Samsung had to be at the top of the heap and he figured that Apple would be a close second with something like 35%+ market share. He’s only partly right and now he’s totally wrong, because Huawei has jumped ahead of Apple for the most smartphone sales.

The market analysis comes by way of a consulting firm called Counterpoint Research. They looked into global smartphone sales for June and July and they’ve learned that while Samsung continues to hold the throne, Apple has now been bumped into third place. Maybe that Huawei KFC phone really put the Chinese company on the map.

The other big factor to consider is that the newest generation of iPhone is literally around the corner, so a lot of people might be holding off until they see the new one. This would result in a temporary slump in iPhone sales compared to the year-round cycle at Huawei where new models are released all the time.

Unsurprisingly, most Huawei phone sales are coming from its home market in China, including its popular Honor sub-brand. The company also has a strong presence in Europe, Latin America and the Middle East, but it doesn’t enjoy the same kind of popularity in North America, India or South Asia. Sales of Huawei phones have been bolstered with big displays and advanced cameras too. 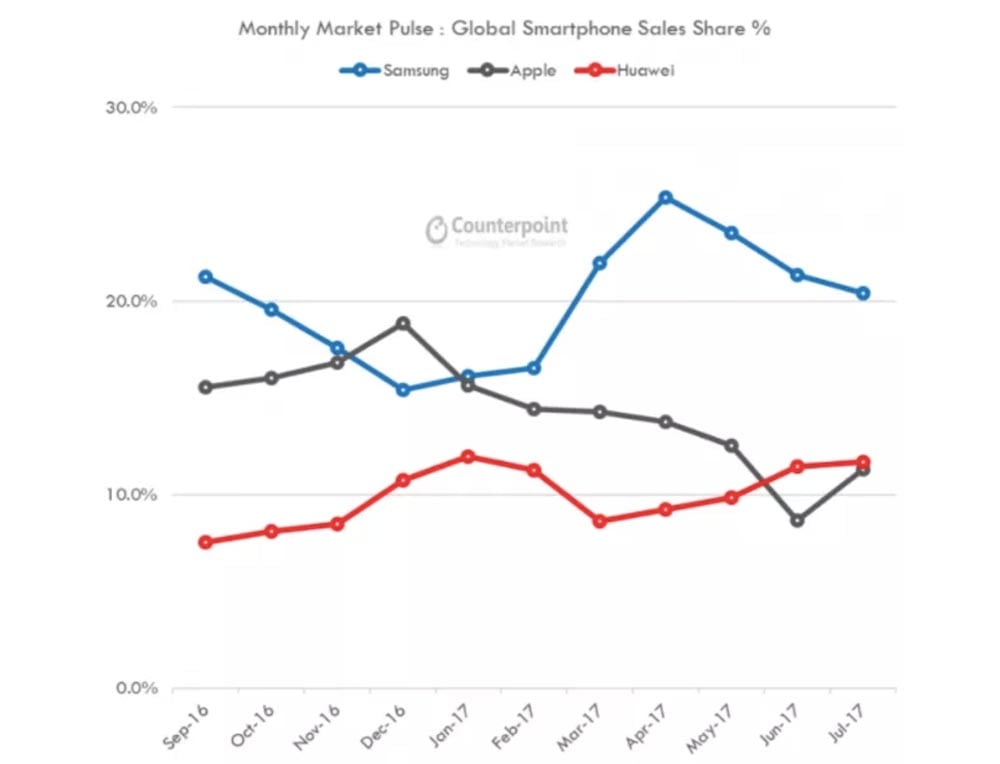 As you can see in the chart above, Samsung temporarily dipped below Apple last December, likely related to the whole exploding Note7 fiasco, but it has since rebounded with a vengeance. Huawei eked above Apple in June with only a small margin in July, but that’s two months in second place and Counterpoint expects that trend to continue as August figures start coming in.

And counter to my brother’s guess of Apple’s 35%+ market share, it’s really closer to about 10-15% most months with Samsung hover in the 15-25% kind of range. Huawei has been hovering around 10% with steady growth since March.

Even though Apple got pushed to third place, it still holds the top two spots when you consider individual models. For July, the iPhone 7 accounted for 4% of global sales, whereas the iPhone 7 Plus accounted for 2.9%. This is followed by two OPPO phones (2.1% and 2.0%) and then the Galaxy S8 at 1.8%.