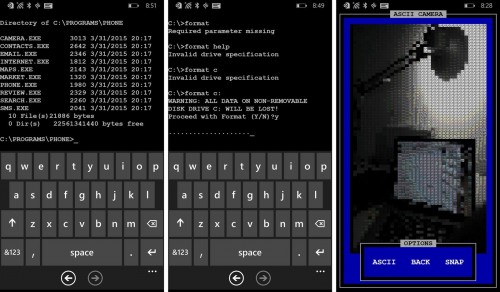 Hats off to Microsoft for one of the funniest and most elaborate pranks of the day. In an attempt to poke fun at themselves over the lack of their mobile success, they have actually released an MS-DOS mobile app for Windows Phone. April Fools’ day is generally more annoying than enjoyable, but it does allow for gems like this.

I don’t know if operating MS-DOS is quite like riding a bike, but those of you actually remember using DOS might be able to find their way around with the DIR and CD commands. If you run the camera.exe app you can actually take an ASCII or CGA selfie. Typing WIN will get you to Windows 3.1.

The Verge has a list of fun commands for those who own Windows Phones. Those who don’t can check out the video below to see what it’s like. The idea itself is funny enough, but the fact that Microsoft actually released the application takes it to a whole new level.