In the last ten years, we’ve seen an emerging trend among many Taiwanese companies. They had traditionally worked as OEM and ODM manufacturers for other companies and while they want to continue that business, they also want to build up their own brands. Another trend that we’ve seen more recently is the rise of the affordable 3D printer. And combining these two trends at COMPUTEX 2014 last week was the new XYZprinting da Vinci 3D printer.

XYZprinting is actually an offshoot of Kinpo Group in Taiwan and it’s a “joint venture” between two of Kinpo’s subsidiaries: Kinpo Electronics and Cal-Comp Electronics and Communications. You may not know them by name, but the latter is actually the second largest contract notebook maker in the world and Kinpo itself has been a Hewlett Packard supplier for many years. Kinpo is now bringing this manufacturing expertise to the world of 3D printers with the da Vinci under the XYZprinting banner.

The XYZprinting da Vinci uses fused filament fabrication (FFF) and features a single extruder with a 0.1mm layer thickness. The most notable highlight of the da Vinci, however, is its incredibly low price point of just $500. Compare that to the Tinkerine Studios Ditto Pro for $2,000 and you can see just how aggressive XYZprinting is being with its approach to this market. 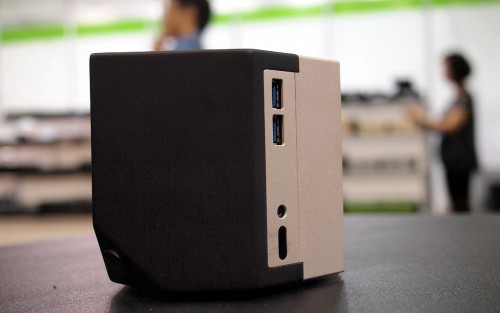 We saw the da Vinci in the corner of the Streacom booth at COMPUTEX. Streacom specializes in sleek computer cases, so why would they have a 3D printer there? While you can’t print out a computer chassis using a 3D printer, Streacom did show up a compact chassis where the XYZprinting solution could come in handy. The entire front fascia can be printed and replaced using Streacom’s specs. Our friends at Futurelooks will have a video covering that more in depth a little later on.

Pre-orders for the XYZprinting da Vinci 3D printer from Kinpo will be taken starting in September with shipments to follow starting in December. It may also be offered on an OEM basis through international companies too.