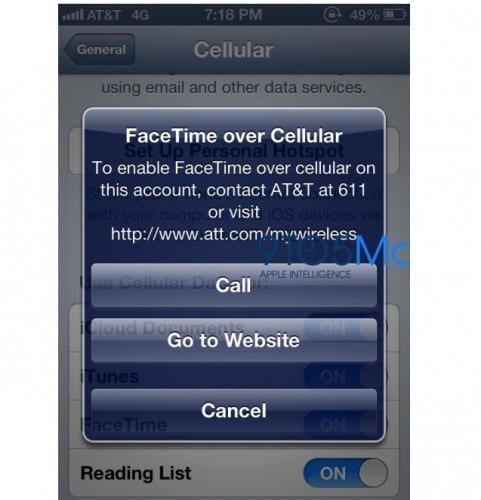 If you go to other parts of the world, you’ll find that many cellular data plans offer you vanilla data. You can use that data however you see fit, whether it be streaming video, checking email, or turning your device into WiFi hotspot. But that’s not the case with AT&T. They charge you extra for using the hotspot feature, for instance, and it looks like they’re doing the same with FaceTime on the iPhone.

Originally, FaceTime was restricted to WiFi connections and the only way you could FaceTime over 3G was with a jailbroken workaround. With the pending arrival of iOS 6, it was revealed that FaceTime would be officially operational over a cellular connection. That is true, but AT&T is going to charge you for that feature. This was revealed by way of the screenshot above, showing what happened when FaceTime was attempted over an AT&T 3G connection. You have to call in to “enable” this feature, which usually means you have to pay for it. When FaceTime on a Verizon iPad was tried over cellular, using the same iOS 6 beta build, no such error message was displayed.

I just think it’s silly. Yes, FaceTime uses a lot of data, but that’s why you have capped data plans. If someone wants to rifle through their data plan with a lot of FaceTime action, let them do that and rack up the overages. Data is data is data, right?