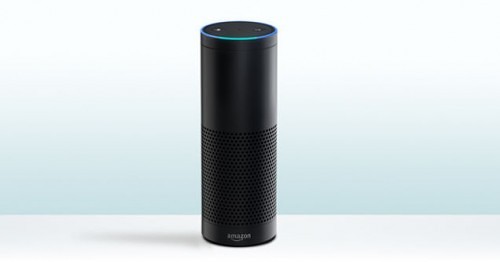 When it comes to fictional future technology that I desperately want, hoverboards have never been my thing. I can’t stay upright on a regular skateboard. Flying cars would be neat, but I’m not too great behind the wheel, either. An AI-powered home system similar to Tony Stark’s Jarvis? That’s something I can get on board with. The Amazon Echo isn’t exactly that, but it’s certainly a step in the right direction.

The Amazon Echo is a modest little black cylinder that displays the Amazon logo and houses a visible speaker for playing music, voice playback, etc, and slightly less visible microphone for when you want to shout commands at it. The Amazon Echo announcement page displays sample commands like “add gelato to my shopping list” and “Wikipedia: Abraham Lincoln,” but presumably people who aren’t painfully boring can also use the device. Echo can give you the news, play music, set your alarm, answer your questions and more. It’s the closest thing you’ll get to a physical representation of Cortana. There’s an app for it, too, so you can configure all the above stuff while you’re away from the device. The fun is in yelling at it, though.

The Amazon Echo is available by “invitation only” for $199, while Amazon Prime members can get it at the limited-time only price of $99. Check out the announcement to read more about it and order yours.