If you listened to the technologists and industry analysts last year, they would have told you that 2013 was going to be the year of the smartwatch. That hasn’t really come to pass, as the smartwatch still isn’t exactly a mainstream thing, but the format has gained in popularity. One product that slipped quietly under the radar is the Sony SmartWatch 2 (SW2), a device that will play friendly with just about any contemporary Android smartphone.

Many people didn’t even know that Sony already had a first-generation SmartWatch, so imagine their surprise when the SW2 launched a short while ago. This isn’t so much a quantum upgrade to the original as much as it is an incremental update. They’ve refined a few things, bumped up some features and made for a better overall package. The SmartWatch 2 features a 1.6-inch display with a 220 x 176 pixel resolution and it is through this display that you’ll get an assortment of pushed notifications over Bluetooth. You can pair it up with your Android smartphone via NFC or you can take the manual route with a Bluetooth pairing.

As far as the specs go, you’ll find an IP57 waterproof certification, a battery rated for 3-4 days of typical use, a silver button on the side reminiscent of the current generation of Xperia smartphones, and Android-esque capacitive touch buttons on the front for back, home and menu. The standard package comes with a rubber wrist strap, but that can be replaced with any normal watch strap of the same size. That’s one key advantage that the SW2 has over the Galaxy Gear from Samsung.

The Middle of the Road Approach 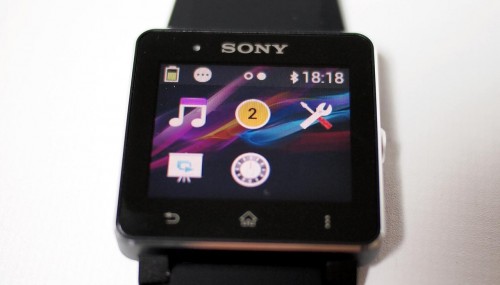 And speaking of the Galaxy Gear, Sony’s offering in the smartwatch category decidedly slots below the Samsung Galaxy Gear in terms of features. You won’t find a microphone or speaker here, so you won’t be talking into your wrist like an international man of mystery. There’s no camera on the strap either, though there is an app that lets you use the SW2 as a remote trigger for your smartphone camera.

All this being said, the functionality of the Sony SmartWatch 2 is a step above what you’d find with the Pebble Smartwatch. You do get a color touchscreen, for example, so you can swipe to your heart’s delight. While you can read the entirety of pushed tweets and text messages, you do get a truncated version of e-mails and longer messages via the SW2. The Pebble has better compatibility, since it works with iOS too, but the SW2 is better than the Galaxy Gear in this regard.

There are a couple of core apps that you’ll need to install on your Android smartphone in order to use the Sony SmartWatch 2. The first of these is for the pairing and automatic connection, whereas the second is used to manage the data and apps on the watch itself. It’s through this app that you can do the “mark all as read” for your text messages, for example, and it’s also through here that you will be linked through to the Google Play Store to find suitable SW2 extensions.

The smartwatch comes with a very barebones number of apps, so you will need to download the additional extensions for Gmail, missed calls, Twitter, Facebook and the rest of it. Some of these come from Sony directly, but many more are third party offerings. As mentioned, there is no microphone on the SW2, but you can pre-define some canned responses for SMS that you can send out directly from the watch itself. The same can be said about sending a message after you receive a missed call.

The Android app is far from being the most attractive thing in the world, but it is mostly functional and it gets the job done. The UI will depend on the associated extension too; the Twitter extension is great in that you can select which Twitter accounts you’re following that you want to have their updates pushed to your wrist. It’s terrible in that you can only see an extra long list of checkboxes in alphabetical order by name (and not handle/username). This is a huge pain if you’re following more than a few people, especially since all new follows are automatically added to the push list.

The SW2 works… most of the time. It is very useful, particularly for text messages, because it means that I can read those messages without having to take out my phone. The resolution on the small display is decidedly low, so you will feel like you’re looking back to the display of your dumbphone from 10 years ago. The font isn’t terribly small, but it is anything but crisp.

Some apps and extensions certainly work a lot better than others. Getting the Twitter notifications was handy, but you’ll want to make sure you only get pushed for a small handful of accounts, as your alert list will fill up very quickly. The remote camera app gives you a very pixelated preview of what your smartphone camera is seeing, and even then, it’s on a solid two second delay. And even then, it only works sometimes. I wanted to use the music player controller extension, but it kept crashing. I wanted to get IM push notifications from WhatsApp, Facebook and Hangouts, but that didn’t work either.

For the time being, I’ve been restricting usage to Twitter, Gmail, Facebook and text messages. I do get the occasional lag or stutter, and the touchscreen isn’t nearly as responsive, compared to what we’ve grown accustomed to having on our phones. I do appreciate the “transreflective” display, though, because it means that I can still use the SW2 as a watch without turning on the backlight. There is no gyroscope or accelerometer like the Galaxy Gear for motion gestures, though. 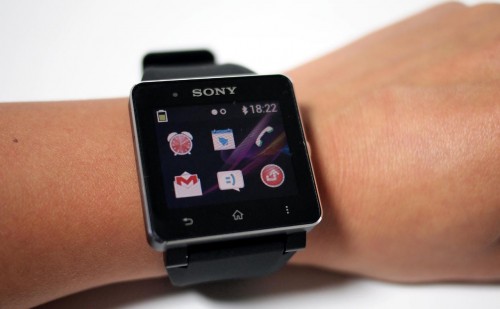 Do you remember the early generations of smartphones? I sure do. My first smartphone was an HTC Wizard running on Windows Mobile. It was slow, it was buggy, but boy was it smarter than the “feature phone” I had previously. I feel like the current generation of smartwatches is going to undergo the same kind of growing pains and it’s going to take at least a couple of years before they become more mainstream and more viable.

The Sony SmartWatch 2 SW2 is a geeky toy for now. The push notifications are handy (no pun intended), but the watch still has a lot of room for improvement. It can crash, it can lag, and some extensions simply don’t work. The battery life is rated at about 3 days, but with intermittent use and turning it off at night, I was able to stretch it for almost a week. I envision the smartwatch being useful while playing sports too, because it means that I can leave my phone in my bag off to the side.

There is certainly promise and potential in this segment of the market, but the SW2 isn’t quite where it needs to be. You can find it online for less than $180 and, as a geeky toy, you could certainly do a lot worse.