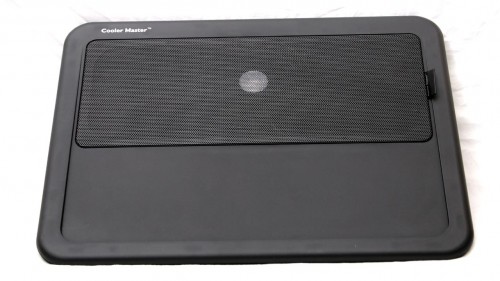 As far as notebook coolers go, they generally fall under one of two categories. You have the type that strive to keep your laptop as cool as possible and then you have the type that is meant to give you the most comfortable experience possible. Somehow marrying the two constructs is the NotePal LapAir from Cooler Master.

Features at a Glance

You’ve likely seen other lapdesks before. They’re basically a serving tray with a pillow beneath them. This can make it more comfortable for you to use a notebook on your laptop, but they rarely do anything to keep said notebook cool. The NotePal LapAir is different in that it contains a “noiseless fan with great cooling performance.”

There is just the single 80mm blower fan there, but the design has been made to spread that cool air across the width of the aluminum plate. On the flip side, you get a “comfy sponge mat” that gives a softer surface on your lap. Power comes by way of an attached USB cable (with pass-through for additional USB accessories) and the NotePal LapAir will accommodate notebooks up to 17-inches in size.

On a side note, I find it amusing that the front of the box (shown above) tells you to “flip the package over” and “feel the comfy sponge.” When you do flip it over, though, the “comfy sponge” is covered by a hard plastic window. So much for feeling the comfort.

What’s in the Box?

This is a notebook cooling pad. Not surprisingly, then, there really isn’t much you’ll find inside the retail packaging. Pulling out the NotePal LapAir itself, the only other thing in the box is the single sheet of instructions. Considering that there is just a single USB cable, you have to be pretty dense not to know what to do.

On a related note, it is almost a shame that this cooling pad is that simple. There is no on/off switch for the fan, nor is there a dial for adjusting its speed. Furthermore, there is no USB hub or any other “bonus” feature that gives added value to this product. I guess it’s purpose-built, but I would have liked to see a simple USB hub included. The pass-through cable connector isn’t really good enough.

I really liked the Cooler Master NotePal ErgoStand that I reviewed some time back, but it is not at all appropriate for use as a lapdesk. This product is different in that it can be used both on your lap and on a table.

Most of the construction is with a thicker plastic, but there is a metal mesh on top of the fan, the sponge mat on the bottom, and some rubber grips here and there. Overall, the build quality feels good and I understand going with a “soft” plastic for the purposes of comfort. I almost wish the “comfy sponge” covered more of the base, though, as the front two-thirds are just the plastic.

Thankfully, there are no sharp edges and general usage was quite comfortable. The lack of height adjustability is forgiveable too, since you can just move your legs ever so slightly. The set angle is good in any case.

How Does It Cool? 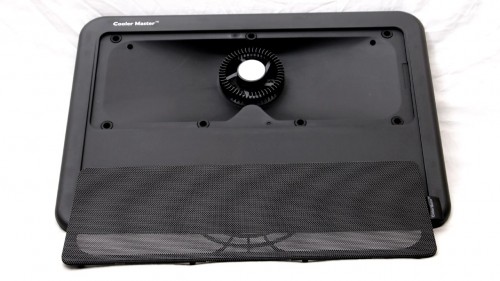 This cooling pad comes with an active fan. That’s very good. I’ve never had particularly good success with notebook coolers that don’t have spinning fans. The one in the NotePal LapAir is quite different, though, as it doesn’t use the conventional “blade” design. You’ll also notice the contours around the fan; these channel the air through the entire width of the product. That’s good.

And so, as I have done with other notebook coolers, I put the NotePal LapAir through my roughly standardized test. First, I set the notebook on a flat surface without the cooler. I let a “cold” notebook fully boot and sit idle for about 15 to 20 minutes, reading the temperature with CPUID. I then ran the full PCMark05 suite to simulate a “load” scenario. This takes about 30 minutes on my Dell Inspiron 640m. The temperature is similarly recorded and, after allowing the notebook to shut down and cool down completely, the procedure is repeated with the cooler in place.

And here are the results. As you can see, the idle temperatures were more or less comparable with and without the notebook cooling pad in place. Most readings were within a degree or two of one another. However, the temperatures are notably lower with the LapAir under the “load” situation.

The minimum temperatures were up to seven degrees Celsius lower and the maximum temperatures were similarly a few degrees lower too. Based on this roughly scientific test, I would say that the NotePal LapAir is an effective cooler. This will depend, of course, on the exact laptop being used as they have different cooling systems in place. Since the Dell draws air in from underneath, receiving the cooled air from this product serves it quite well.

In general, I like this product. I would have preferred if there were a smaller version, though, since anyone with a 14-inch or smaller notebook probably doesn’t want something quite this large. It would take up a fair bit of room in a briefcase or backpack, after all.

The overall comfort and usability is good, though having a fuller cushion on the underside may have been more desirable. Similarly, the lack of a USB hub or fan speed control makes the Cooler Master NotePal LapAir fall short of my criteria for a perfect notebook cooler. As it stands, I’d still recommend this lapdesk, so long as you keep those caveats in mind.