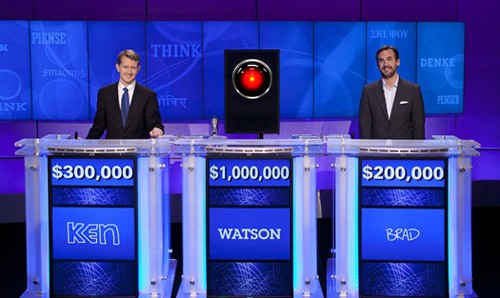 Even if you aren’t an avid viewer, the news is a little hard to avoid: Watson, the IBM computer that was created to decimate its human opponents on Jeopardy, did just that. Watson came out on top, earning thrice the score of second place runner-up Ken Jennings. Jennings took it in stride, even sneaking in his Final Jeopardy answer “I for one welcome our new robot overlords.”

This was of course written in jest, but a century of science fiction has taught us that the robot apocalypse is no laughing matter. Looking back at popular cinema, what bleak mechanical future could Watson be paving the way for?

The first thing that pops in my head is HAL 9000 from Stanley Kubrick’s classic sci-fi 2001: A Space Odyssey, inspired by Arthur C. Clarke’s short stories The Sentinel and Encounter in the Dawn.

Watson’s calm, relaxing speech reminds me very much of HAL 9000, who in many ways was friendlier than the actual humans aboard the Discovery One. Both systems also shared a deep database of knowledge, and while Watson’s was used as both a test and public display of how far technology had come, it’s only a matter of time before said technology will become standard use in various systems, even spacecraft.

I, Watson and the Skinjobs

Once the technology behind Watson becomes fully mastered, cheaper, and easier to manufacture, it will finally go into mass market production and we will have much smaller, human-sized Watsons integrated in our daily lives. Like HAL 9000, these Watsons will be sentient, and because of rampant technophobia and the Frankenstein complex as displayed in Isaac Asimov’s I, Robot stories, we’ll begin to fear these robots. And as humans often do, we will oppose these robots that we fear.

This will lead to “skinjobs,” robots that disguise themselves as humans in order to protect themselves, as seen in things like Blade Runner and Battlestar Galactica. This will make them near impossible to detect, which many will see as a hostile action and only serve to strengthen the divide between man and machine. This will kick off the great robot hunt and “blade runners” will be born, seeking out mechanical beings and putting an end to them. More than ever, robots will need to defend themselves.

Finally, once this human-robot struggle has gone on long enough, we’ll see all-out war not unlike that depicted in James Cameron’s Terminator franchise. This will of course take place after the technological singularity and a newly-created superintelligence will command the machines in such a manner that’s impossible for humanity to predict. This unpredictability coupled with superior technology will leave little chance for us humans to survive.

What’s scariest about all of this is how easy it is to chart the rise of the machines and the subsequent downfall of man. With that in mind, I’d like to join Ken Jennings in sincerely and compliantly welcoming our robot overlords.